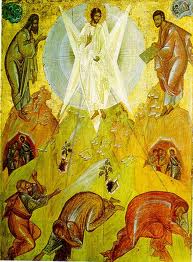 THE TRANSFIGURATION OF OUR LORD

In 2 Kings, Elijah is taken up into heaven by a whirlwind, with a chariot and horses of fire attending. Elisha takes on the mantle of Elijah, striking the waters of the Jordan and parting them.Shades of Moses.

2 Corinthians is complex. Paul is defending his apostleship in the face of some false apostles. In chapter 3 he explains that he and his colleagues are ministers of a new covenant, not written on stone (like the Ten Commandments/Law) but rather on hearts. The revelation of the Law came in such glory that the people could not look upon Moses’ face. It had to be veiled. If the ministry of condemnation had glory, how much more must the ministry of justification have glory! Paul figures the reason his fellow Israelites don’t “see” Jesus as the messiah is because the veil is still there. When one turns to the Lord, the veil is removed. In Christ, we see the image of God as in a mirror. One imagines an icon of Christ, as a mirror through which one views the glory of God over ones shoulder. Enter chapter 4. Even if our gospel is veiled, it is veiled only to those who are perishing (presumably in their sins and condemnation by the law). The god of this world has blinded them from seeing the glory of God as reflected in the face of Christ. It is a complex argument, borne out of Paul’s grief that all Israel has not run to Christ. The Transfiguration is referenced in Matthew 17, Mark 9, Luke 9 and 2 Peter 1 (16-18). Some (who propose an unlikely date of 64 A.D. for 2 Peter) suggest that this account predates the gospel accounts. Others suggest that Peter is behind the writing of Mark’s gospel. If so, the scribe of Mark’s gospel may be penning an old man’s firsthand account of a life-changing, perspective-altering, mountain-top experience. Origen suggested this was a preview of the resurrection. Later scholars proposed a theory that it was a resurrection story mistakenly or intentionally misplaced. Yet, it lacks some of the characteristics of the resurrection appearances (like Jesus being gone at the beginning of the narrative). In either case, the oral iconography is clear: Jesus is the fulfillment of the law and the prophets. This was Luther’s interpretation.

The story has all the marks of a theophany. The glory of God is reflected in Jesus as it was (is) in Moses and Elijah. They are on a mountain top just as Moses and Elijah were on the mountain top. The cloud is the Shekinah of God’s glory. This event confirms Jesus as the Son of God. The voice is heard as at Jesus baptism: “This is my Son…”

Once, a friend invited me to run a 200-mile race, with a team. It was called the Hood-to-Coast. We started on Mt. Hood, the largest mountain in Oregon (11,000 feet), above the tree-line, above the clouds. The view is incredible, it inspires awe. When was the last time you felt awe? The thing about mountains is the perspective you get. You can see for miles. You see how little you are. You think about yourself and about things differently when you’re on the mountaintop. It’s both exhilarating and terrifying.

Mount Tabor, looming above the Jezreel Valley, is where some folks imagine the Transfiguration. There is a church here on the ridge, called the Church of the Transfiguration. Under it lie the remains of a very old church. We don’t know how old exactly. One writer mentions seeing three basilicas there in 570 A.D.Jezreel is where Elijah fought the prophets of Baal and where Jesus was raised as a child. Why this mountain? This valley?The view? The sense of history? A sense of perspective?

Others place the Transfiguration on Mount Hermon, further to the north, which is nearly 10,000 feet in altitude. MountHermon is now a well-known Israeli ski resort attracting thousands every year. Why do they go? Could it be the exhilaration and perspective one gets on the mountain top?

Moses had his perspective changed on the mountaintop. Hewent up for forty days and forty nights. He hid in the cleft of the rock as God passed by because he could not behold the brightness of God’s glory because it would consume him. On the mountain God gave Moses the Ten Commandments.

Elijah also had his perspective and life changed in a mountaintop experience. He traveled 40 days and 40 nights to get to Mount Horeb, what the Bible calls the Mountain of God, the same mountain where Moses saw the burning bush, thesame mountain where Moses received the law on tablets of stone. It was there that Elijah experienced a terrifying storm, with wind that brought down rocks, but God was not in the wind. Then there was an earthquake, but God was not in the earthquake. And after the earthquake a fire, but the Lord was not in the fire. But after that there was a whisper of silence. And God was in the silence.

We are invited in Word and Sacrament to climb the mountain and behold the glory of God in the face of Christ, the fulfillment of the law and prophets. May it change your perspective.

Joel precedes Isaiah as a prophet of Judah. Joel lived in the 8thcentury B.C. during the reign of King Uzziah. We know that Isaiah received his call after that: “In the year that king Uzziahdied, I saw the Lord seated upon the throne…” (Isaiah 6:1).Uzziah’s time was a golden era for Judah. Wine flowed freely. Flocks and herds abounded. It was a time of material prosperity. Occasionally (always?) in times of prosperity, people can get lazy, over-confident and self-centered. Joel begins with a shot across the bow: “Wake up, you drunkards,and weep…” (Joel 1:5a)

By the time we reach our text in chapter 2, the rant is in full swing. The prophet proposes a way for a society choking on material wealth to respond. Perhaps we should listen in. “Blow the trumpet. Sanctify a fast. Call a solemn assembly. Invite young and old, even newlyweds on their honeymoon.”

In 2 Corinthians, Paul makes it clear that unlike the false apostles, he does not need letters of recommendation. In fact, his sufferings (in which he dares to boast) speak for themselves. They commend him and his colleagues: afflictions, hardships, calamities, beatings, imprisonments, riots, labors, sleepless nights, hunger… having nothing, yet possessing everything. Paul’s own austerity is an example. He knows he’s not saved by his suffering, but he considers it a confirmation of his calling to share in the sufferings of Christ.

The gospel reading, from the Sermon on the Mount, gives us Jesus’ instructions to his followers regarding fasting and prayer, with a preview on almsgiving. Jesus assumes his followers will fast and pray. He doesn’t say “if you fast,” but “when you fast.” Fasting and prayer are assumed staples of the spiritual life in antiquity.

Jesus’ warnings are in line with much of the synoptic tradition. The real danger, the real sin to worry about, is self-righteousness. So when you pray, don’t do so in order to be seen by others. A genuine seeking of God in private will bear much fruit. As a show, it puffs up. When you fast, don’t go around looking dismal to show off. Wash up and stand up straight so that others don’t even know. And when you give alms, don’t sound a trumpet. Don’t wave that check in others’ faces before dramatically dropping it in the offering plate. Let what you do grow out of your faith, not out of a need to look good before others.

A younger generation is aching for ancient spiritual practices. Prayer, fasting, and almsgiving provide a way to live what we believe. My preaching professor used to write at the bottom of our sermons: “So what?” (Or was it just my sermons?) Yes, God was in Christ reconciling the world unto himself. So what? How then shall we respond to the grace we have received in Christ Jesus? They are saying, “Teach me.”

While in seminary, I took a class on spiritual direction at theJosephinum Pontifical College in Columbus, Ohio. The nun teaching the class noticed that us Lutheran students were struggling. “How many of you have been on a 30-day retreat?” We shook our heads. “What classes on prayer and spirituality have you taken?” We shook our heads, “None.” “What classes are required?” We shook our heads. “What classes are offered?” I went back and looked. None. I’m sure the situation has been remedied. We were as perplexed as the nun. Our training had been in theology and Scriptural exegesis. Aside from daily chapel, we not been taught the rich Christian traditions of prayer. I went to the seminary bookstore and bought several books on contemplative prayer, set aside some time to try, found a spiritual director, and embarked on a new journey.

Perhaps Lent can be a time to get back to the basics. As Vince Lombardi said, “Gentlemen, this is a football.” Lent may be a time to say, “Ladies and gentlemen, this is prayer.” We can teach lectio, oratio, contemplatio and meditatio. Matthew Fox pointed out in On Becoming a Magical Mystical Bear,we learned to pray in our formative years when we were dependent on our parents for everything, so we came to know prayer as asking for stuff. Many people have arrested spiritual development. They never learned to pray as adults.

What might happen in our communities if we were to recommit to teaching basic spiritual practices? What fruit might that bear? How might it change the mood of the congregation? How might it affect congregational decision-making? How might it impact our vision, mission and core values?

This Lent teach people how to pray. Teach them how to fast. Talk to them about how to give. This Ash Wednesday why not have a local rabbi come and blow the shofar?

“Sound the trumpet. Sanctify a fast. Call a solemn assembly. Invite young and old, even newlyweds on their honeymoon.”