As we approach Lent, I think about the text for Lent 1: the Temptation of Jesus in the wilderness.

Everyone faces temptation, even Jesus. Even Sam Houston.

Sam Houston fascinates me. He’s a colorful, fascinating character. Apparently someone else thought so too. I couldn’t believe it the first time I drove north from Houston, up I-45 towards Huntsville and Sam Houston State, and saw the colossus on the right. “Good heavens. What on earth is that?” I asked Susan. At first I thought it might be Oral Roberts’ 120-foot Jesus! Not Jesus, but Sam Houston. Bigger than the trees. Larger than life. Few know his story.

Born in Virginia, moved to Tennessee, Sam Houston lived for a while with Cherokee Indians, who named him “Col-lon-neh” which means “The Raven.” He loved the Cherokee, and even wore his hair long in their style, though historians rarely paint him that way.

Severely wounded in the War of 1812, he was noticed by General Andrew Jackson, who helped him become a member of congress. And then he became Governor of Tennessee. He suddenly resigned as governor and went to live in the wild. Some say he discovered his wife was having an affair. He was a broken man. The Cherokee gave him a new name. Oo-tse-tee Ar-dee-tah-skee. No longer was he “The Raven.” Now he was “The Big Drunk.” We all have our wilderness experiences. This was his.

Always the tactician, Sam Houston said the Alamo was not worth fighting for. It would not change the course of the war. He ordered Colonel Travis to abandon the Alamo. But we know of course, he didn’t. Houston had a wily strategy that involved avoiding battles. So his army grew stronger, and stronger, gathering more and more people, until in 1836 he was so strong he surprised Santa Anna at San Jacinto, securing Texas independence. He became the president of a new country, the Lone Star Republic.

However, having served in the U.S. congress, Sam Houston knew Texas would be stronger if united with other states. He lobbied very hard for nine years, until in 1845 Texas became part of the United States of America, and Sam Houston, former Governor of Tennessee, former commander of the Texas Army, former President of the Lone Star Republic, became… a U.S. Senator.

Houston served as Senator for 14 years, until 1859, when he returned home to cheering crowds on the Galveston wharf, tall, 66-years old, 6-foot-two, blazing blue-eyes, white-haired, wearing a Mexican sombrero and serape. He was the very embodiment of Texas. A symbol all by himself.

Do you think he retired? Oh no. Sam Houston then ran for governor in 1859. He was so confident, he only gave one speech, in Nacogdoches. And he won. Then he set his sights on the highest office in the land: He wanted to be elected President of the United States of America in 1860 or1864 at the latest.

The Texas legislature wanted overwhelmingly to follow suit, and secede, but Sam Houston would have nothing to do with it. He spoke boldly to Texans: “Stick with the Union! Stick with the Union!” He had worked too hard to see a nation divided. His goals were to save the nation from civil war. Against the will of their own governor, the Texas legislature voted 167 to 7 in favor of secession. So Sam Houston forced them to put it to a statewide, popular vote. Texas was the only Southern state to do so.

Though it was political suicide, Houston traveled all over Texas speaking against secession. He even gave a speech right here in the little town of Montgomery where I live. He was labeled a “traitor to the South.” In Galveston opponents threatened to kill him if he even spoke. But he went to Galveston and spoke anyway. He spoke of the bloodshed that would result. Fathers and husbands, sons and brothers, millions of dollars, hundreds of thousands of lives. He saw it. He was a visionary man. You have to respect someone who speaks out of his convictions, even though he knows they are unpopular and perhaps even dangerous to him.

It was eloquent and prophetic, but futile. Mobs and night riders terrorized people into voting for secession or staying away from the polls. Less than half the eligible voters went to the polls, and those who did voted 3 to 1 for secession. And on March 2, the 25th anniversary of Texas Independence, coincidentally also Sam Houston’s 68th birthday, the convention proclaimed Texas out of the Union. Sam was forlorn.

To make matters worse, the Texas legislature passed a law requiring every state official to take an oath of allegiance to the Confederacy. Governor Sam Houston was summoned to appear before the legislature on March 16 to take the oath. If he refused, he would be deposed as governor, and, of course, say goodbye to his presidential aspirations.

On the night of March 15 he paced, and paced, all night long, on the second floor of his house, wrestling with his spirit. One of his daughters said he wrestled, “as Jacob wrestled with the angel.” The temptation to cave in must have been unimaginable.

In the morning he slowly came down the stairs. Entering the kitchen where his wife was preparing breakfast, he announced in a quiet voice, “Margaret, I won’t do it. I will never do it.”

In every person’s life, there comes a time when we face the temptation to do what is safe, or convenient, or comfortable, or profitable, versus what we are convinced is right.It happened to Sam Houston and it will happen to all of us at one point of another. Perhaps many times. And when your time of temptation comes, don’t listen to the angry crowd. Do not follow the popular voices. Listen to your heart. Listen for the still small voice of God.

When your day comes, two of your most important tools will be prayer and fasting. Prayer is wrestling with God. Prayer is silence contemplation. Prayer is pouring our hearts out.

Fasting is giving up the little things so that we can train ourselves to give up the big things. Fasting is mentioned all over the Bible. It is a spiritual practice that focuses us on God. Every Lent Lutherans and Catholics all over the world fast. They deny themselves something, in order to become less dependent on the things of this world, and more focused on the things of God. I encourage you to commit yourself to the prayer and fasting, and almsgiving, the disciplines of Lent.

By the way, Sam Houston’s friends offered to help him fight for his governorship. President Lincoln even offered to send in troops. You know what Sam said?

“It would be criminal to deluge the capital of Texas with the blood of Texans, merely to keep one poor old man in office a few days longer.”

After the Civil War, when all of Houston’s bloody predictions about the war had come true, he regained his popularity, and respect for standing by his convictions. And on July 26, 1863, after a short illness, he died at his ranch near Huntsville. No saint. Just a flawed human being like you and me, who wrestled with his ambitions and his morals, and in the end made his decision, like each of us must do. 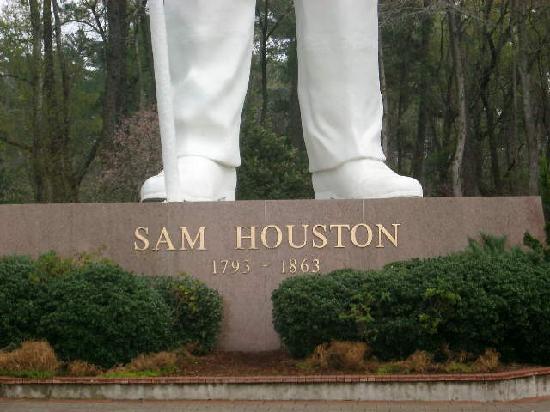 2 thoughts on “Sam Houston and temptation”