Isaiah 9:2-7 – For unto us a child is born, a son is given, and the government shall be upon his shoulder

Psalm 96 – Sing to the Lord a new song… for he will judge the world with righteousness.

Titus 2:11-14 – For the grace of God has appeared, bringing salvation to all…

Psalm 97 – The Lord is King; let the earth rejoice!

Titus 3:4-7 – When the goodness and loving kindness of God our Savior appeared, he saved us.

Isaiah 52:7-10 – How beautiful the feet of the messenger who announces peace

Psalm 98 – sing to the Lord a new song… for he will judge the world with righteousness.

John 1:1-14 – In the beginning was the Word, and the Word became flesh and dwelt among us.

In those days a decree went out from Emperor Augustus that all the world should be registered. This was the first registration and was taken while Quirinius was governor of Syria. All went to their own towns to be registered.

These are historical figures.

Emperor/Caesar Augustus (63 BC – AD 14) was the first Roman emperor (27BC – AD 14) and the founder of the Roman Empire. He was the great nephew and adopted heir of Julius Caesar. He unified and expanded the empire by an incredible amount. During his lifetime taxes from conquered territories were so great, he completely rebuilt Rome, while those in present-day Italy did not have to pay taxes at all. His last words were purportedly, “Behold, I found Rome of clay, and leave her to you of marble.” He died at the age of 75 when Jesus was just a youth. He was succeeded by his adopted son Tiberius.

Publius Sulpicius Quirinius (Κυρήνιος) was a Roman aristocrat who lived 51 BC – AD 21. He was a military leader who was eventually appointed as Rector to Augustus’ grandson. According to Josephus (writing in AD 93-94, about the same time that the Gospel of Luke was written), Quirinius was appointed legate/governor of Syria around AD 6, with instructions to oversee the taxation of Judea, Samaria and Idumea. Taxation required a census. Since census taking was against Jewish law, and the Jews opposed pagan occupation anyway, the announcement of the census sparked the revolt of Judas of Galilee. People rioted in the streets of Judea. The Romans brutally crushed the rebellion. 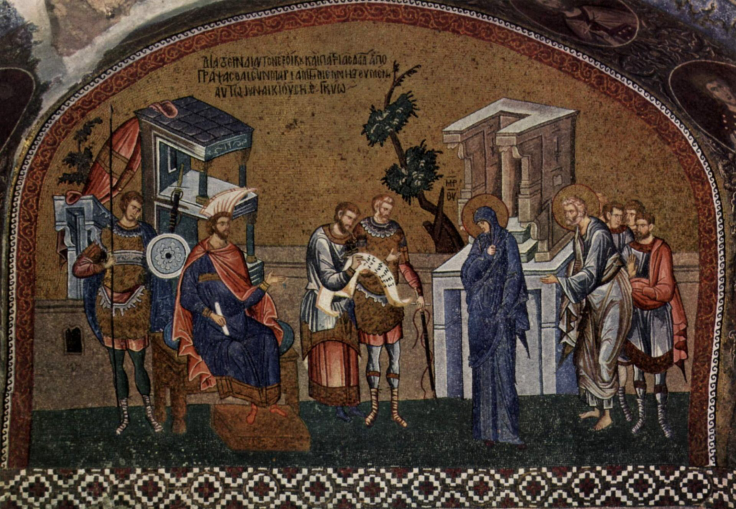 Above:Mary and Joseph register for the census before Governor Quirinius. Byzantine mosaic at the Chora Church, Constantinople 1315–20.

Luke begins by grounding the story firmly in time and history, if also with a bit of hyperbole (“all the world”). He also grounds it in the Roman occupation. Richard Swanson of Augustana College in Sioux Falls, South Dakota, points out that the Jews are clearly a subjugated people marching to the tune of the Romans.

Joseph also went from the town of Nazareth in Galilee to Judea, to the city of David called Bethlehem, because he was descended from the house and family of David. He went to be registered with Mary, to whom he was engaged and who was expecting a child.

Some say it’s plausible that the Romans would make everyone return to their home town for a census. I believe it spurious. It would be utter chaos, disrupting the economy on which the taxes depended, and there is no record of the Romans ever doing this to my knowledge. But Luke has Mary and Joseph going to Bethlehem for one reason or another. In his dramatic retelling of the story, Luke lets us know that Mary and Joseph are engaged to be married, and she is quite pregnant. The child will be of the house of David because Joseph is of the house of David. As an adoptive father, I find it quite touching that Jesus is of the house of David even though Joseph claims to not be the father.

While they were there, the time came for her to deliver her child. And she gave birth to her firstborn son and wrapped him in bands of cloth, and laid him in a manger, because there was no place for them in the inn.

Notice verse 7 says “firstborn” son. Does this suggest there are more children are to come? Bede thinks not. Firstborn is code for Bede, who says the well known words, “but to as many as received him he gave power to become children of God.”

The word tranlated “inn” is kataluma. It doesn’t really mean “inn.” The word for inn is pandokion. In Luke 22:11 and Mark 14:14, kataluma is translated “guest room.” It is in such a room where Jesus and the disciples have their last supper. Luke’s intent is to tell us that there is not even a guest room available because it is already occupied. However, the rules of hospitality require that you provide housing, so they ended up staying in the area of the house with the animals. Today we have a hard time understanding this, but that place was in the house. People brought their animals into the house. The Latin Vulgate translated kataluma as diversorio. In 1611 the King James version, which was translated from the Latin Vulgate, properly rendered diversorio as “inn.” And so, today we have Jesus born in a barn because there was no room for him at the hotel. I wouldn’t try to tell your congregation otherwise. People don’t like it when you mess with their childhood stories.

Regardless of translation, Luke’s intent here is nevertheless clear. Jesus is born in meager circumstances, not laid in an expensive crib, but rather, laid in a feeding trough. While men of power like Caesar and Quirinius call the shots in Rome and Syria, in a pastoral, little town far from those seats of power, a baby is born quietly in obscurity. Yet long after most people have forgotten the name Quirinius, Jesus will be held in the highest regard, his birthday celebrated by hundreds of millions of people. In the scope of history, the name above all names will not be an emperor or military commander, but a Jewish carpenter’s son who preached peace and love.

In that region there were shepherds living in the fields, keeping watch over their flock by night. Then an angel of the Lord stood before them, and the glory of the Lord shone around them, and they were terrified. But the angel said to them, “Do not be afraid; for see—I am bringing you good news of great joy for all the people: to you is born this day in the city of David a Savior, who is the Messiah, the Lord. This will be a sign for you: you will find a child wrapped in bands of cloth and lying in a manger.” And suddenly there was with the angel a multitude of the heavenly host, praising God and saying, “Glory to God in the highest heaven, and on earth peace among those whom he favors!”

Luke doesn’t tell us when these things happened. Maybe here we have a clue. Bethlehem and Nazareth (32°N) are on roughly the same latitude as Houston (30°N). While it is technically possible, therefore, that shepherds would be outside in the winter, it is more likely autumn of AD 6. I’ve read that folks in that time and part of the world tended to bring their animals in at night during the winter. Not that Luke would know any of this. He thinks there are tiles on roofs in Galilee (Luke 5:9). Luke is a wealthy, well-educated Roman, and he gets confused about Palestinian geography and customs.

Luke’s shepherds experience profound theophany. Angels announcing mysteries, and singing “Glory to God in the highest and on earth peace to all whom God favors.” Unlike the secret identity of Jesus in Mark, that no one gets until the centurion at the cross, in Luke the announcement comes early and to all: The child born in Bethlehem is Messiah, Savior, Lord.

When the angels had left them and gone into heaven, the shepherds said to one another, “Let us go now to Bethlehem and see this thing that has taken place, which the Lord has made known to us.” So they went with haste and found Mary and Joseph, and the child lying in the manger. When they saw this, they made known what had been told them about this child; and all who heard it were amazed at what the shepherds told them. But Mary treasured all these words and pondered them in her heart. The shepherds returned, glorifying and praising God for all they had heard and seen, as it had been told them.

The shepherds returned glorifying and praising God for all they had seen. The word “shepherd” is the same as the word for “pastor.” Bede says, “for in a mystery, those shepherds and their flocks signify all teachers and guides of faithful souls.” (Jeffrey, Luke) Shepherds and pastors are those who have been captivated by the glory of God, and go for glorifying and praising God and telling the world that Jesus is Messiah, Savior and Lord.

The child born in “House of Bread“ (“Bethlehem,” in Hebrew) will be the bread of life. His birthday is not trumpeted by warriors, but by angels. His legacy is not war and conquering armies, but peace and conquering love. His is the embodiment of his own sermon: “The meek shall inherit the earth.”

Here is a beloved Christmas hymn that didn’t make ELW. LBW 74: A Stable Lamp is Lighted, the words of American poet Richard Wilbur, connects the manger and the cross…