Isaiah 50:4-9a – I gave my back to those who hit me; my cheeks to those who pulled out the beard. I did not hide my face from insult and spitting.

Philippians 2:5-11 – Have this mind among that was in Christ, who emptied himself and became obedient to death on a cross.

Paul’s Christ Hymn in Philippians 2 comes up on this Sunday in years A, B, and C. The only other time it pops up is during the season of Christmas, on January 1st, Holy Name of Jesus, which many Lutheran congregations omit, and Proper 21A/Ordinary 26A/Pentecost +20 in season A, which usually falls in September. This passage is so central to Paul’s Christology in general and incarnation in particular, that one hates to miss an opportunity to preach it. 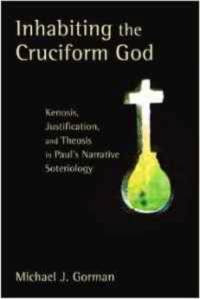 One of my favorite books is Michael J. Gorman’s, Inhabiting the Cruciform God. The book is subtitled: Kenosis, Justification and Theosis in Paul’s Narrative Soteriology.

Now, that’s a mouthful, but it’s more than mere gibberish. This is an incredible work of Christocentric theology. Gorman begins with the number of times Paul uses the phrase “in Christ.” When I reread the New Testament scanning for it, I’m shocked by the number of times I find that phrase, and how I’ve taken it for granted. To cite a couple:

For his sake I have suffered the loss of all things, and I regard them as rubbish, so that I may gain Christ and be found in him. Philippians 3:8-9

Therefore, if anyone is in Christ, there is a new creation. 2 Corinthians 5:17

I remember Mark Alan Powell telling us that there are no places in the Bible where we are told to invite Jesus into our heart. Not that it’s a bad thing to do, but the New Testament never mentions it. Instead, it invites a flip-flop of that. Not Christ in us, but us “in Christ.” Paul has a robust “in Christ” spirituality and theology. What exactly does Paul mean by this turn of phrase? What does it mean, concretely, for Paul to be “in Christ?”

That last part is critical: to live the cruciform life is not to lay claim to status and power, but to take on the form of a servant. This is what it means to be “in Christ.”

Gorman’s scholarship and exegesis is impeccable. The first part of the book focuses on Paul’s Christ Hymn in Philippians 2, which he calls Paul’s “Master Story.” His brilliant work has huge implications for the church, especially in this postmodern context.

Let the same mind be in you that was in Christ Jesus, who, though he was in the form of God, did not regard equality with God as something to be exploited, but emptied himself, taking the form of a slave, being born in human likeness. And being found in human form, he humbled himself and became obedient to the point of death- even death on a cross.

Therefore God also highly exalted him and gave him the name that is above every name, so that at the name of Jesus every knee should bend, in heaven and on earth and under the earth, and every tongue should confess that Jesus Christ is Lord, to the glory of God the Father.

Of course the big argument in church history was the pre-existent camp versus the adoptionist camp. The pre-existent folks point out that Christ was already in the form of God and had to empty himself to become human. My systematics professor called this “theology from above.” The adoptionists pointed out that the phrase “Therefore God highly exalted him…” means that Jesus became Christ, and therefore God, because of his obedience unto death. God adopted him as Son.

Gorman’s work here is brilliant. Christ’s kenosis, his self- emptying reveals the character of God, and forms the key to understanding Paul’s theology, Christology, and ethics. The theology of this seminal passage permeates all of Paul’s letters. Gorman suggests that a kenotic Christ means a kenotic God. Paul’s understanding of Christ, and thus his understanding of God, is in two parts:

Humility is the character of those “in Christ.”

Although Christ was in the form of God, he did not count on it but emptied himself.

Do you see the rhythm of this? Gorman points out that time and time again. Paul displays this pattern in his own behavior, probably unconsciously. And, this underlying pattern is woven throughout his letters. Here is the formula:

Although [status], not [selfishness], but [selflessness].

Paul is himself doing what he sees Christ doing in Philippians 2. Possessing status carries with it an inherent mandate to deny oneself; practice humility. This does not deny his apostolic identity. It fulfills it. Although he has authority as an apostle, Paul empties himself, exercising humility as a Christ-like act of love. For Paul, love seeks conformity to the self-emptying image of Christ. Humility is the character of Christ, and therefore the character of the one who is “in Christ.” Paul exercises his true apostleship by acting in conformity to Christ.

Jesus expresses his very divinity in “downward mobility.” Gorman cites Joseph Hellerman, saying Phil. 2 is a contrast to the Roman “cursus honorum,” a lifelong, upward mobility to honor in the Empire- from slavery, to peasant, to aristocrat, to divinity (like Caesar). Jesus instead moves backwards- from equality with God, down the ladder to slavery, then even to public humiliation by death on a cross. The phrase “In the form of God” is Paul’s clearest Christological statement.

“In the form of God” vs. “In the form of a slave” was common parlance. For a god to be in the form of a slave was inconsistent in Roman thought. A god does not divest power. Divinity and kenosis don’t go together. Erik Heen points out ἐν μορφn θεοu (en morphe theou – ‘in nature/form, god’) is a phrase used in Emperor cult worship. After Augustus, the phrase was only used for the Roman emperor. So this hymn sets Christ up against the Emperor. Remember, it is most likely that Paul didn’t write this hymn, but is quoting something early Christians sang in worship. We are hearing echoes of the first Christian hymns and theology.

As to the debate about whether Christ already possessed divinity, or ὑπάρχων (huparchon), or whether he grasped (or “exploited” in the NRSV) it, Gorman points out that the exaltation cannot be a promotion to divinity, as if one could earn divinity by being humble, or doing good works. The hymn clearly says that Jesus was already in the form of God, and emptied himself. The exaltation is not promotion, but a confirmation of his divinity.

But is this emptying in contrast to what God is like? Is God in Christ doing something completely out of character? Or is this self-emptying revealing the most intimate and profound character of God?

In other words, Gorman says, there are two possible readings of this text:

Of course, Gorman’s point is the latter. Jesus redefines divinity, and this ultimately changes the world irrevocably. Jesus subverted and deconstructed concepts of divinity when he emptied and humbled himself. This is an absurd story of God in first century Rome, which is Paul’s point in 1 Cor. 1:18-25.

Christ’s self-emptying then is not a termination of his deity; it is the fullest expression of it. Gregory of Elvira said that Christ’s majesty and divinity, though never lost, were “momentarily hidden,” as the sun is hidden behind a cloud. Gorman argues that Paul’s point is quite the opposite, that the humility of incarnation and the cross in fact reveals divine majesty. Like Father, like Son. Christ reveals the true nature of God.

Bishop Brauer-Rieke from Oregon told me of some congregations in Portland, who were struggling in this difficult economy, and now with a colder-than-ever winter. Many were unable to pay their astronomical heat bills. One congregation, Redeemer, strongly rooted in the community, realized that the houses in their neighborhood were built about the same time as the church and, therefore, the people in the neighborhood must be going through the same thing. They turned their focus from inward (their own energy bills) to outward (their neighbors’ energy bills).

One pastor in our synod tells me his congregation was dying when he arrived. They figured, if we’re going to go out, let’s go out with a bang. They used their coffers to bless the neighborhood. They gave and gave. And of course, they started to grow. This is, in part, why, even when times are tough, cutting back on our percentage of giving is not appropriate. A church that doesn’t give isn’t a church.

For his sake I have suffered the loss of all things, & I regard them as rubbish, so that I may gain Christ & be found in him. Phil 3:8-9

The Christ Hymn of Philippians 2 echoes another ancient hymn in Isaiah 40-55: The Song of the Suffering Servant. God’s power is made known to the world in self-emptying. To paraphrase Irenaeus and Athanasius: “God became what we are to make us what he is.”

There’s no wiggling out of this.

The good news is, when we give ourselves away, that’s when we really begin to see what life is about.