As you may recall, on February 13 a fire was started at the Quba Islamic Institute in Houston.Christians and Jews rallied around leaders at Quba, who eventually asked for the charges to be dropped.

Houston has a strong history of interfaith cooperation. We do not want to have the kinds of eruptions we have seen elsewhere. “When one person is hurt, it hurts all of us in the community,” said Rabbi Steve Morgan of Congregation Beth Yeshurun.

As a gesture of good will, religious groups have been taking offerings for the rebuilding of Quba’s cafeteria and recreation center, which will cost about $200,000. At our most recent meeting, the Gulf Coast Synod Council agreed to raise funds as a gesture of support. Interfaith Ministries’ director Elliott Gershonsen said, if each group would give $2,000 or more, it would go a long way. 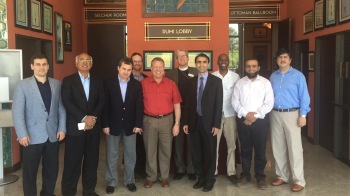 Last week I met with a group of imams from the Houston area. General Presbyter Mike Cole and Pastor Joel Goza from Pleasant Hill Baptist joined me for a gathering with about seven Muslim leaders, to hear stories and share experiences.

When you build bridges, walls of suspicion and hatred begin to come down. My personal take away was how much these leaders enjoyed the freedom of religion we share here in the U.S. They had few stories of religious prejudice. Some had experienced no negative treatment because of their faith.

If you or your congregation would like to be a part of this good will offering, I would invite you to send your check to the synod office with “Quba Rebuilding” written in the memo line. You can also donate online.

In a world of religious and racial persecution, let us set the example of hospitality and freedom.