Lord of Life in The Woodlands has a free trade ministry: Hands of Faith Fair Trade. Here’s why.

Many of the things we buy are made by slaves. There are more slaves today than ever before in the history of the world. A slave is someone who is controlled by violence, forced to work for no pay, exploited economically for the profit of the slave master.

Did children make your clothes? Slaves? What were the working conditions? Do you know? If you did know, would it make a difference in what you buy? Of course it would.

If you knew your purchases were continuing to support slavery, and you continued to make those purchases, wouldn’t you be complicit in the slavery? Even if we never enslave or beat a child, if we just benefit economically from slavery, by goods at low prices, are we not a party in slavery? Are we not part of the problem, encouraging the practice through our buying power? If we benefit from another person’s suffering in any way, we are a part of the problem. 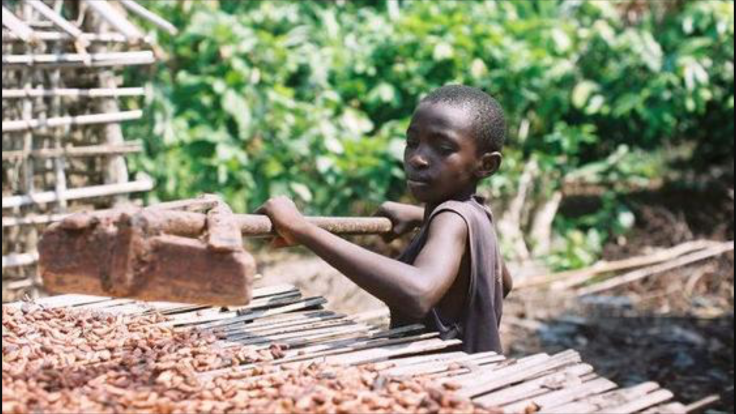 Half of the cocoa in the world, used to make chocolate, comes from the Ivory Coast. Half. It is estimated that 90% of the cocoa farms use slaves. Chocolate companies often claim to not know the working conditions of the cocoa farms from which they buy. In a global market it’s hard to know, but not impossible, if anyone is trying.

The price of cocoa has plummeted in the global market, but the price of chocolate has gone up. Someone is making a profit. Follow the money.

The farmer who can offer his cocoa at the lowest price is most likely to make the sale, and make the money. There is tremendous downward pressure, created by companies buying from the lowest bidder, so they can make the highest profit, and sell the most candy, at a marketable price. We want our candy bars for $1.

The way to produce your cocoa for less is to pay your workers less, or nothing. Slave traders go to Mali and round up children. The children simply don’t come home from school, or play. The parents are forlorn.

The trades then sell these children to plantation owners in the Ivory Coast. There they work all day and are locked up at night. Paid nothing, they are beaten nearly to death if they try to escape. Often other slaves are forced to do the beating, so the owner of the farm can claim innocence. If they survive, they are sent back to work. Some disappear.

Lutheran World Relief helps honest farmers and vulnerable workers. LWR locates farms that pay their workers a fair wage, have healthy hours and working conditions and, of course, do not use slaves. Rather than sell their goods at cut rate prices to multinational corporations, they are helped to produce their own goods. They control the means of production, be it coffee, chocolate, or whatever.

This “clean” chocolate is sold in the United States. It is not marketed like the large multinational companies market. Buy at Hands of Faith Fair Trade at Lord of Life, or online at Lutheran World Relief. You may pay a little bit more, but trust me, justice never tasted so good.

Watch this documentary to see the realities of cocoa plantations for yourself. Then decide what you’re willing to do to not be a part of this.