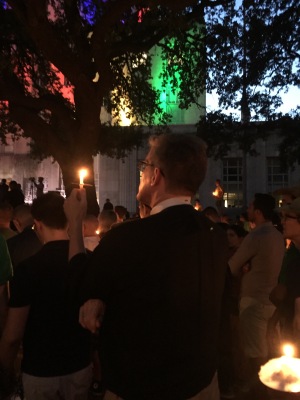 This week we experienced the largest mass shooting in the history of this country. Omar Mateen walked into a gay bar in Orlando and killed 49 people, wounding dozens more. Much is being made by some of his religious background. A year ago today, there was a massacre of a different kind.

A year ago today, on a warm summer evening of Wednesday, a group of church leaders were gathered for Bible study and prayer at Mother Emmanuel AME Church in Charleston, South Carolina. Twenty-one year old Dylann Roof of Shelby, North Carolina walked in, sat with members of the congregation, and then killed nine of them, including Pastor and State Senator Clementa Pinckney. Roof was hoping to ignite a race war stating, “I have to do it. You rape our women and you’re taking over our country. And you have to go.” He shouted racial epitaphs while shooting the nine people. Five times he reloaded his Glock 41 .45-caliber hand gun, a gun he never should have had, due to a prior arrest. The shooting lasted six minutes.

No one made much of Dylan Roof’s religious background. Roof was a Christian, of Lutheran background. The pastor he shot, Clementa Pinckney, was a 2008 graduate of Lutheran Theological Southern Seminary in Columbia, South Carolina. Much was made of Roof dropping out of school and taking drugs, but no one called Christianity or Lutheranism a religion of hate. Some may have mentioned it in passing without much elaboration. The truth of the matter is anyone can hate.

Hatred of LGBTQIA folks, hatred of African Americans, hatred of Jews, and hatred of Muslims are all cut from the same cloth. Our Presiding Bishop calls it “othering” people. We seek out some strange, unknown other upon which to focus attention. If it’s not one group, it’ll be another. Fear of the stranger is a universal phenomenon. This is why Jesus combats it directly: “When I was a stranger, you welcomed me.” “Love your enemy and pray for those who persecute you.” Omar Mateen was born in the U.S. The enemy is not out there; it is us.

When people live in fear of the other, they become anxious and reactive. Fearful people are more likely to lash out. Those who whip up fear in others help create a culture of fear. Leaders can preach sanity, or they can preach mania. Leadership can shape the culture of a community. We seem to believe that violence is the answer to all our problems.

When you combine hate and fear of the stranger (xenophobia), and then provide access to weapons, violence ensues. If someone becomes overwhelmed with fear and anger, and a bat is handy, someone might get injured. If a knife is on the table, someone might die. If it’s a handgun, nine people might die. If it’s an AR-15 assault rifle, 49 might die. The weapon you have when you blow a gasket makes a significant difference.

In 2007, Missouri repealed a long-standing law that required all handgun buyers to pass a background check. By 2014, researchers at the Johns Hopkins Center for Gun Policy and Research reported that Missouri had experienced a 23 percent increase in firearms homicides. No surprise. We worship them, as we worship violence. Your god is that in which you put your ultimate trust. From Martin Luther’s Large Catechism: “To have a god means this: You expect to receive all good things from it and turn to it in every time of trouble.” We think we are safer with guns. If every kid on the playground has a knife, there will be injuries.

Preaching love is more than a sentimental platitude. It is a matter of life and death. The great divide will not be Christianity vs. Islam or heterosexual vs. homosexual. It will be between those of all faiths that preach love and those that preach hate. It will be between those who believe in killing or bombing their enemies and those who believe in feeding their enemies.