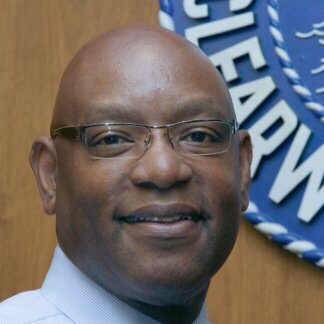 William Horn was elected the Vice President of the Evangelical Lutheran Church in America on August 12, 2016, at the ELCA Churchwide Assembly in New Orleans. He followed Carlos Peña, who served for 12 years.

A member of St. Paul’s Lutheran Church, Clearwater, FLorida, “Bill” has served as City Manager of Clearwater, Florida since 2001, 15 years! He is also an officer of the US Air Force.

Bill has served on the ELCA Church Council, 2009-15. He was the Florida-Bahamas Synod Vice President 2005-09. He has also been president of his congregation.

Bill holds an M.A. Political Science from Auburn University in Montgomery, an M.A. Human Resources Management from Pepperdine University, and a B.S. in Chemistry from the University of Tulsa. He sits on the board of directors of Lutheran Services of Florida, the Lutheran Theological Southern Seminary Advisory Council, the Pinellas Public Library Cooperative and the Clearwater Jazz Holiday Foundation. He is known for his empathy, executive decision-making, leadership, integrity, transparency, trust, experience in managing large organizations, ability to work with diverse populations and individuals, and problem-solving.

“Leadership is the key skill required of a leader in the church. No matter what challenges the church faces, bold, creative, confident leadership is required to make good decisions regarding the church’s future direction. Leadership is the skill that won’t rest  until the facts and spirit led strategies are made known to everyone in order to accomplish God’s mission in the world.”