Bethlehem Round Top at 150

I’m excited to be celebrating the 150th anniversary of Bethlehem Lutheran Church in Round Top this Sunday (1866-2016). Here is a little history.

How Round Top got its name: A stagecoach station at Rocky Creek became known as Round Top Place because the top of a building had an octagonal shape cupola. The stage drivers would yell out upon their approach . . . “Round Top” . . . thus in 1851 giving birth to the name of the town, Round Top.

1840: Houston’s German population reaches 400. A German Union is established by the Texas Congress. 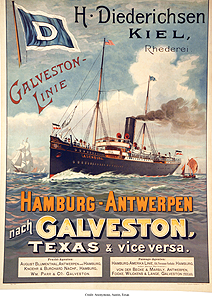 1842: The Society for the Protection of German Immigrants in Texas is formed. More commonly known as the Adelsverein, was a colonial attempt to establish a “New Germany” in Texas.

1843: On January 9, 1843, Count Ludwig Joseph von Boos-Waldeck buys a 4,428-acre Nassau Plantation in Fayette County, two miles east of Round Top, for $0.75. The plantation is maintained by slave labor and operated for the recreational pleasure of the Adelsverein. The plantation is the primary base for arriving German immigrants. Twenty-five slaves are bought to work on the property. Prince Solms inspects the plantation in 1844, and recommends the Verein divest itself of the property, rather than be associated with slavery. Gustav Dresel, Special Business Agent for the Adelsverein, sells Nassau plantation on July 28, 1848.

A Tale of Two Round Tops

1844: Five Adels-Verein ships arrive in the second half of 1844, bringing 439 people (many of whom were impoverished) in 103 families, with 134 children. They settle in a tract of land bought by Prince Carl of Solms-Braunfels, at IndianPoint on Matagorda Bay, about ten miles south of Port Lavaca. The settlement is called Carlshaven, and later Indianola.
Pastor L. C. Ervendberg conducts services there on Christmas Day in 1844.

Even cute songs are composed like Hin nach Texas!

1845-1846: 5,247 more Germans arrive in Galveston. They winter in tents at Carlshaven. Hundreds don’t survive the winter.

1848: The Round Top Post Office was added on to the Dry Goods Store. See photo: 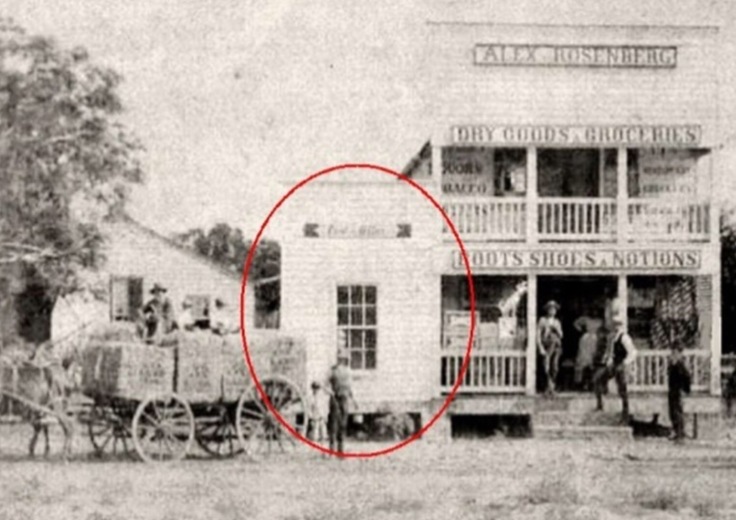 The Lutheran Synod of South Carolina sends Pastor G. F. Guebner to make a trip through the state to analyze the mission field. He organizes a congregation in Galveston and stays a few years. Guebner marries someone in Fayette County in the 1850’s according to records.

1853: A pastor by the name of Adolphus Fuchs is marrying people in Frelsburg in 1853. One license lists him as “A. Fuchs, ordained Luth. Priest, late parson at Kolson, Mecklenberg-Schwerin, Germany.” But by 1861 he simply lists himself as “regul. ord. Min. of the Gospel.”

1854: The Round Top Academy is formed, on the H. Ledbetter Plantation, just 2 miles east of RoundTop.

1855: A Pastor Lieb is serving in Round Top. He is still there in 1858. The congregation at Round Top is “dedicated,” according to the minutes of the Texas Synod Convention. Pastor Roehm takes a call to Frelsburg where he will stay 22 years, until 1877.

Pastor Adam Neuthard (1828-?), who was Heidelberg educated and St. Chrischona School trained, arrives in Galveston from Bremen, and is installed as pastor. In 1861 he marries Fritz Tiemann and Mary Giese.

1863 – Johann Traugott Wandke, a cabinet-maker and organ-builder from Germany, buys a lot in Round Top, moving from outside of La Grange. According to his son, Wandke built seven pipe organs for Lutheran Churches in Texas. Bethlehem’s Wandke Organ, the oldest functioning organ in Texas. John Lienhard’s Engines of Our Ingenuity episode on the Wandke Organ.

1866 – Pastor Neuthard completes his two-story stone home that is, at that time, one of the show places of the county. He boarded students from his school for $4/month. In 1866 he had 20 students boarding. Neuthard knows Greek, Hebrew, Latin, German, French and English. Penmanship was a specialty, and voice lessons were given daily. 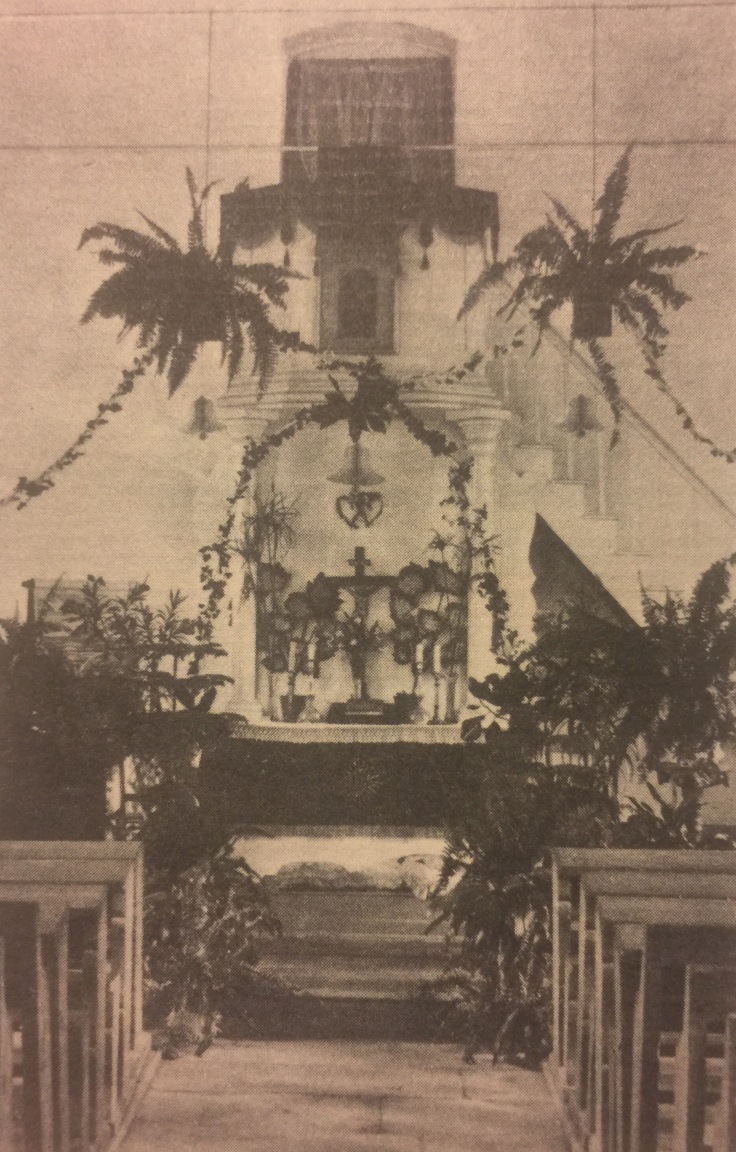 The cornerstone is laid for the new church building in Round Top. This building may be the oldest still-standing Lutheran Church in Texas. The total cost was $2,400. From the picture here, one can see that the pulpit was originally above the altar.

1867 – The Evangelical Lutheran Congregation in Round Top was organized on the First Sunday after Epiphany (January 13, 1867). The Wandke organ was dedicated the same day. The Wandke organ is completed. Bethlehem’s Wandke Organ, the oldest functioning organ in Texas. John Lienhard’s Engines of Our Ingenuity episode on the Wandke Organ. The choir sang, “This Is The Day of the Lord,” and the offering was $50.35.

After being criticized for starting so many preaching points, Pastor Neuthard and Bethlehem withdraw from the Texas Synod.

1872 – Joining fees at Bethlehem Round Top were $5. Members’ children were exempted.

1878 – The Lutheran school becomes part of the school system.

1893 – Adult joining fees were removed, and a $5/year pastor’s salary fee was enacted for all adult male members. 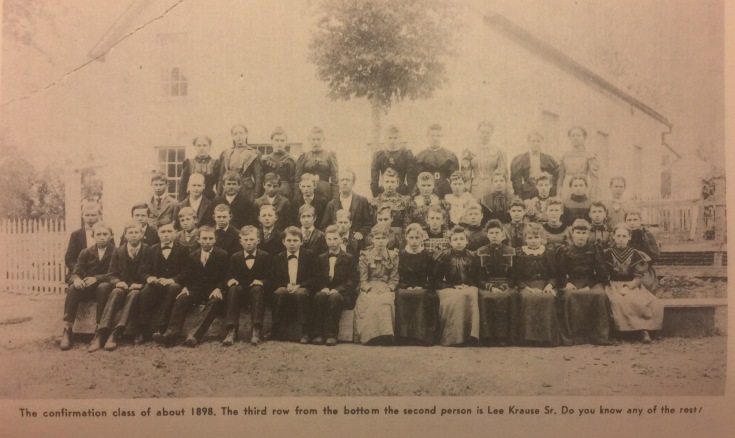 1902: Pastor Neuthard dies after serving Round Top for 41 years. He baptized 2,450 children. He confirmed 1,480 teens. And he buried over 1,000 people. His grave says, “Die Lehrer aber werden leuchten Wie des Himmels Glanz.” Loosely translated, it may mean, “The teacher’s light is like a reflection of heaven.”

That’s the early history of Bethlehem Round Top. For a look at the pastors into the 1960’s check scroll to the bottom.

A Chronology of Lutherans in Texas 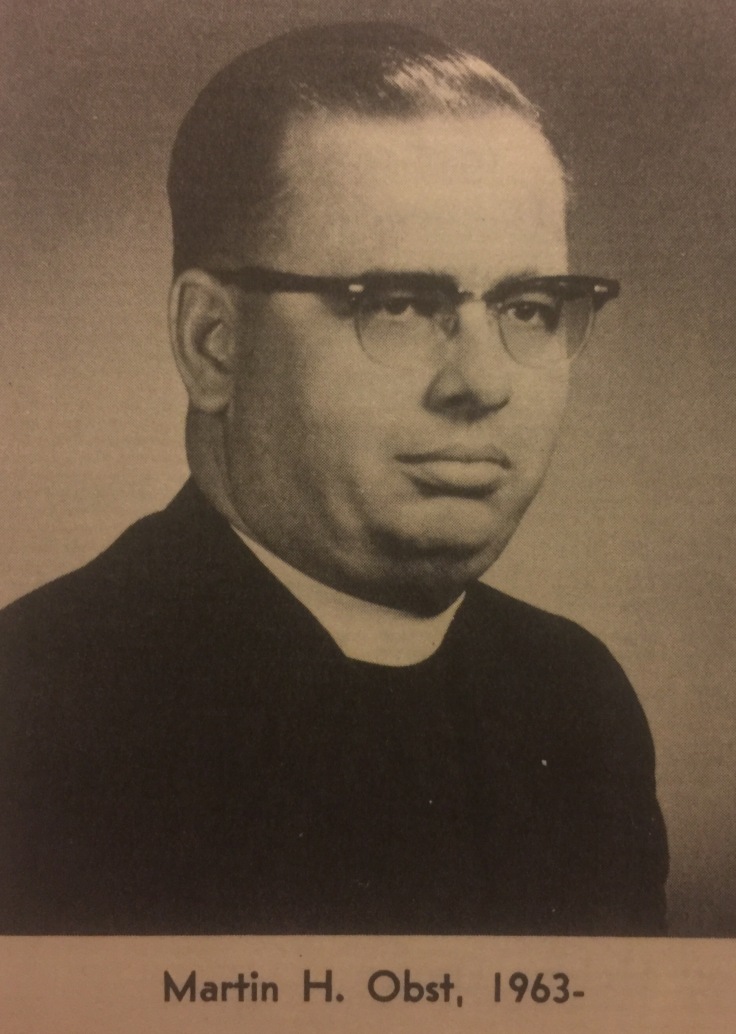 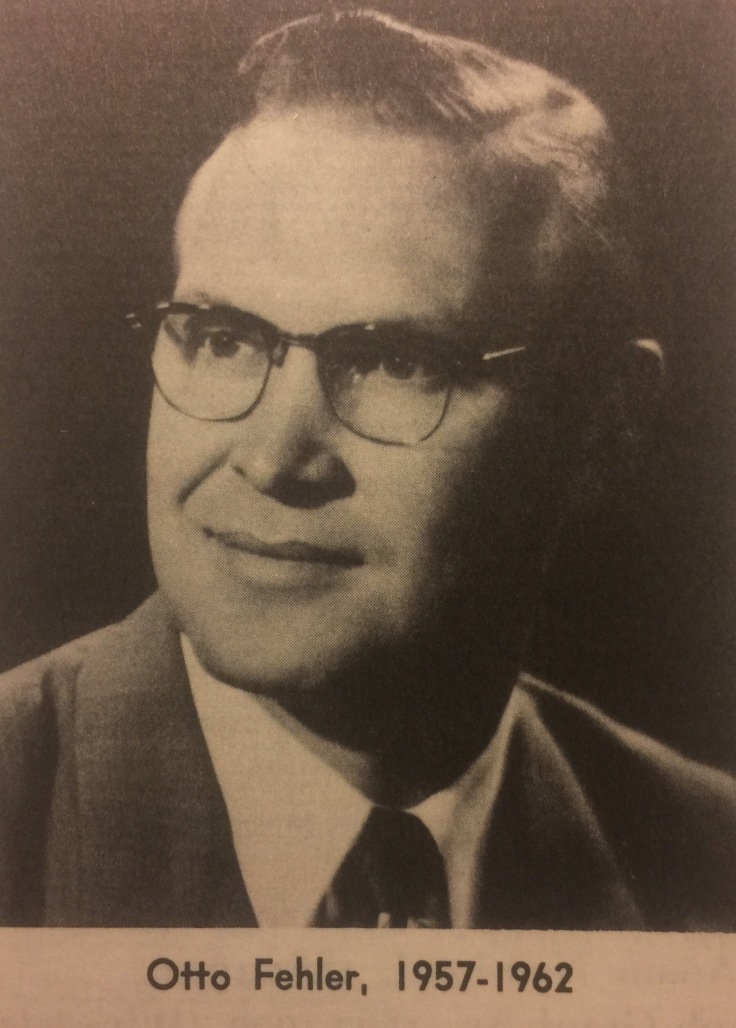 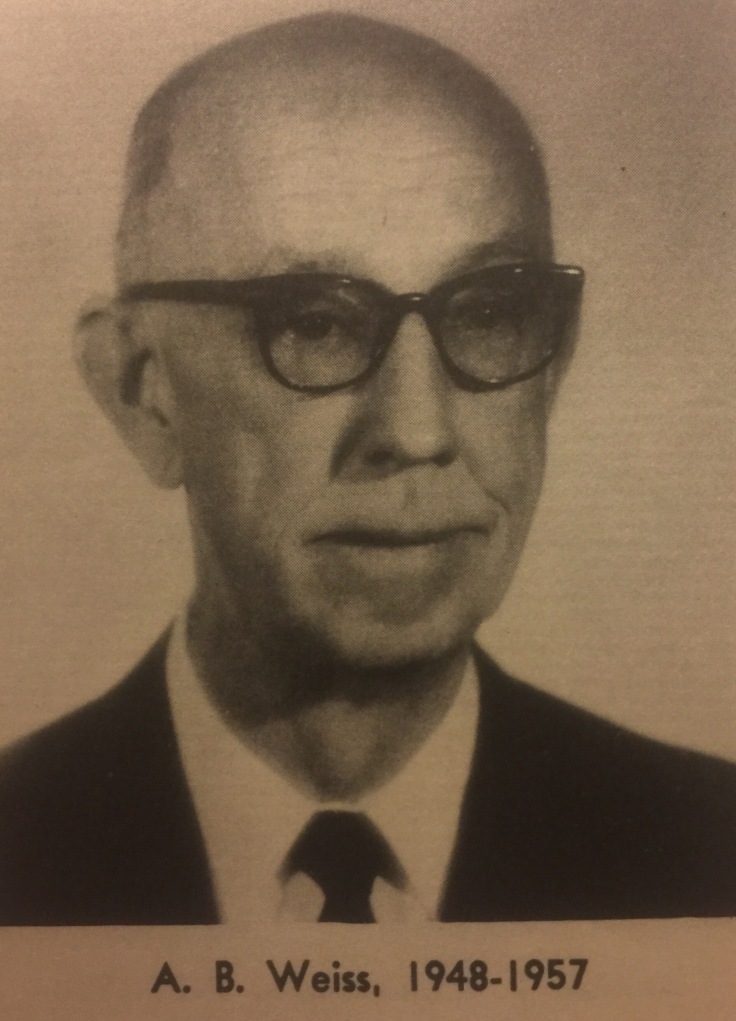 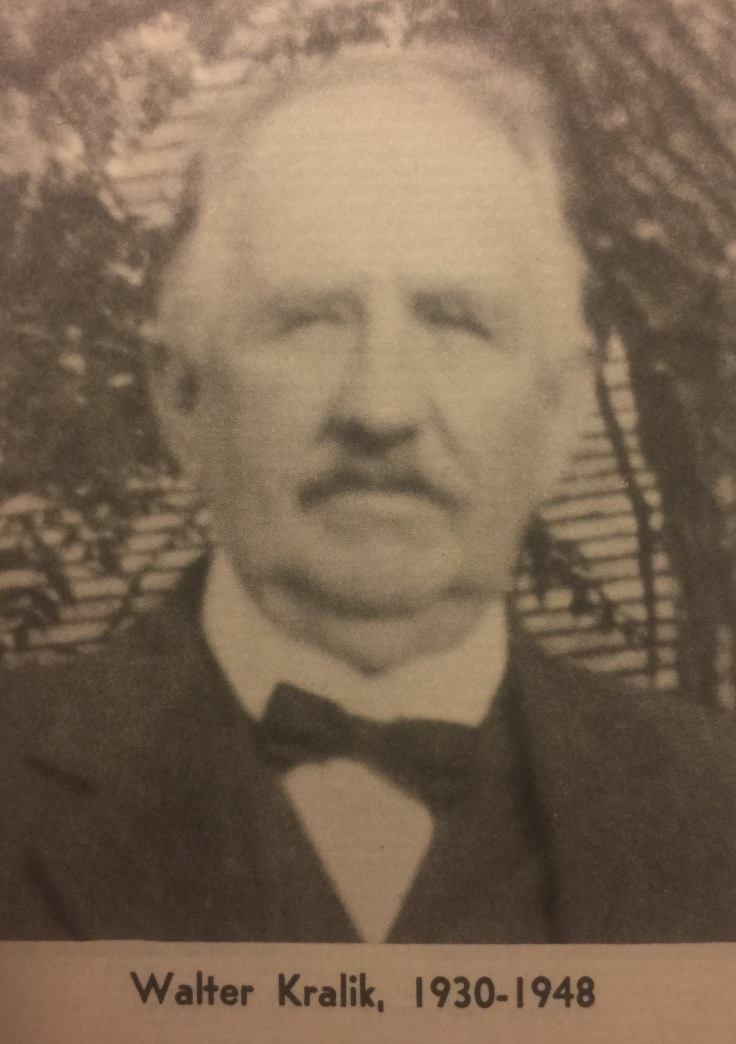 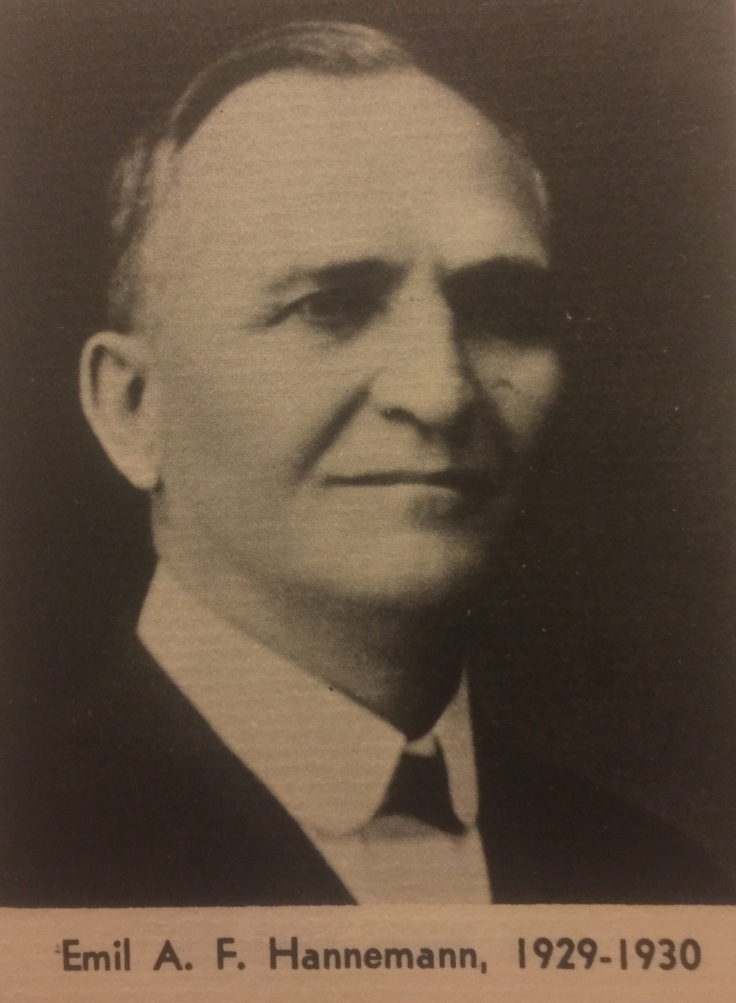 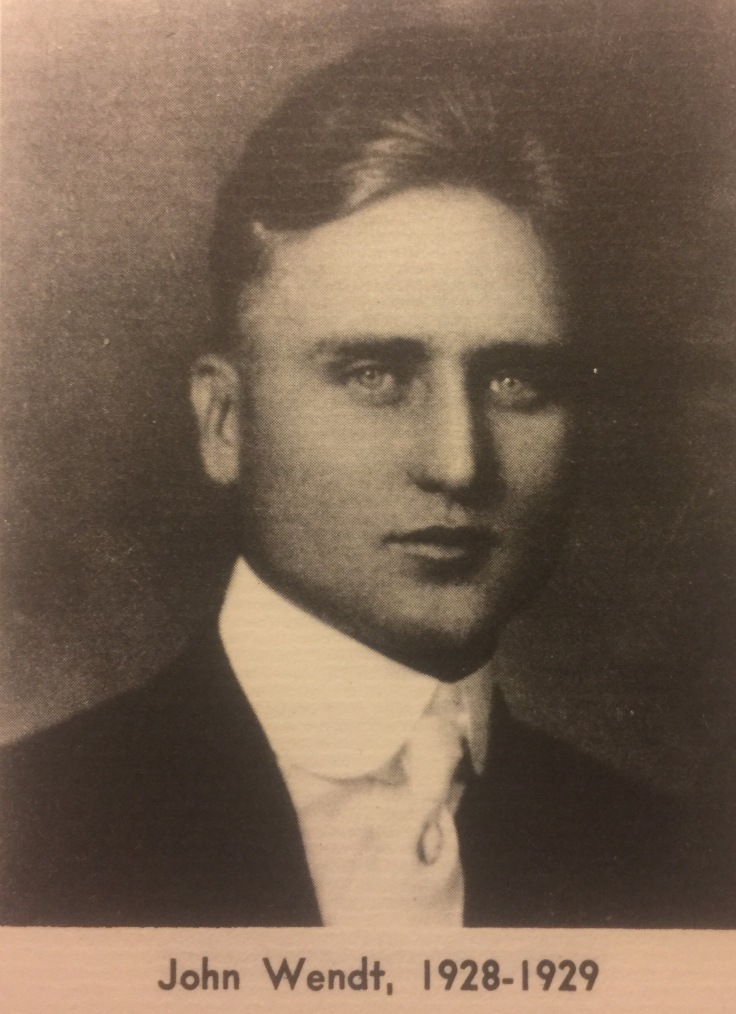 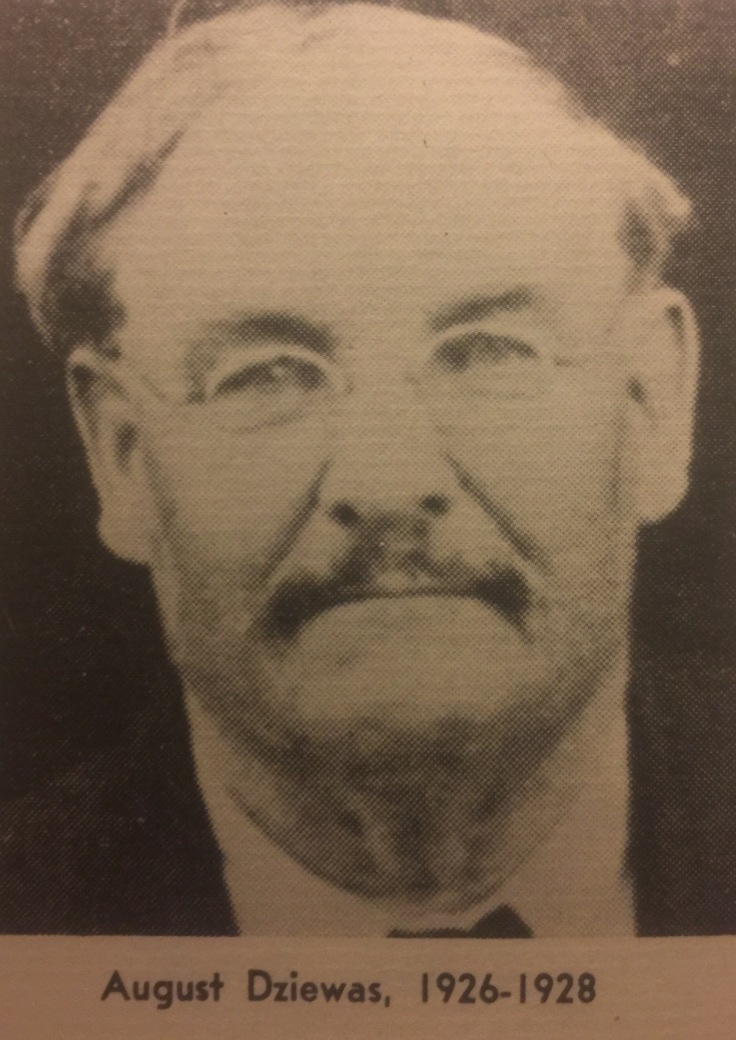 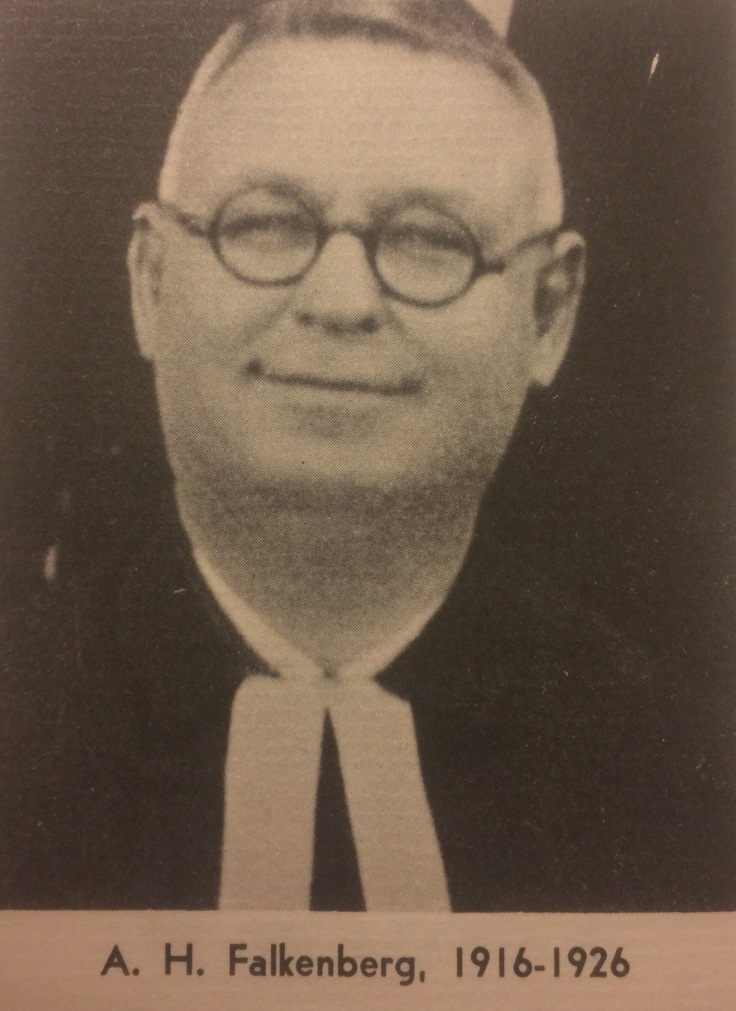 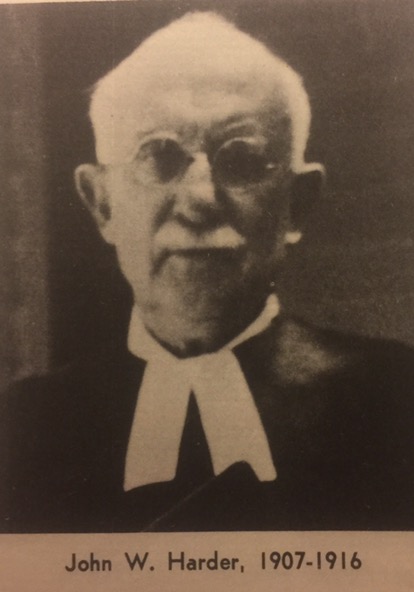 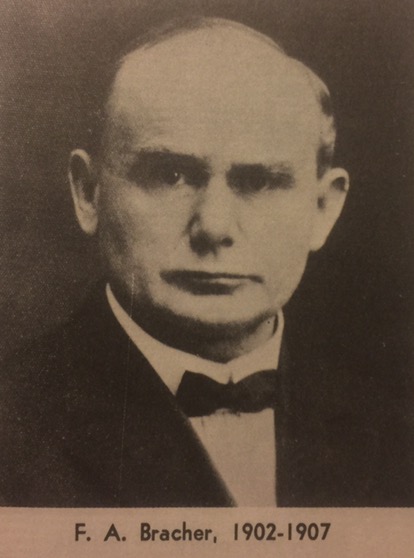 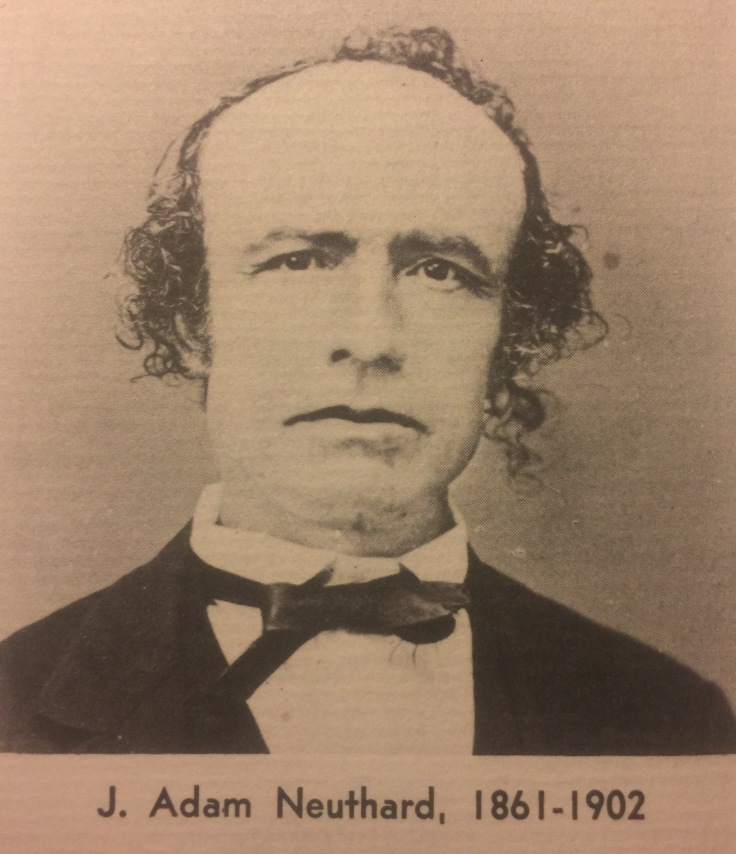 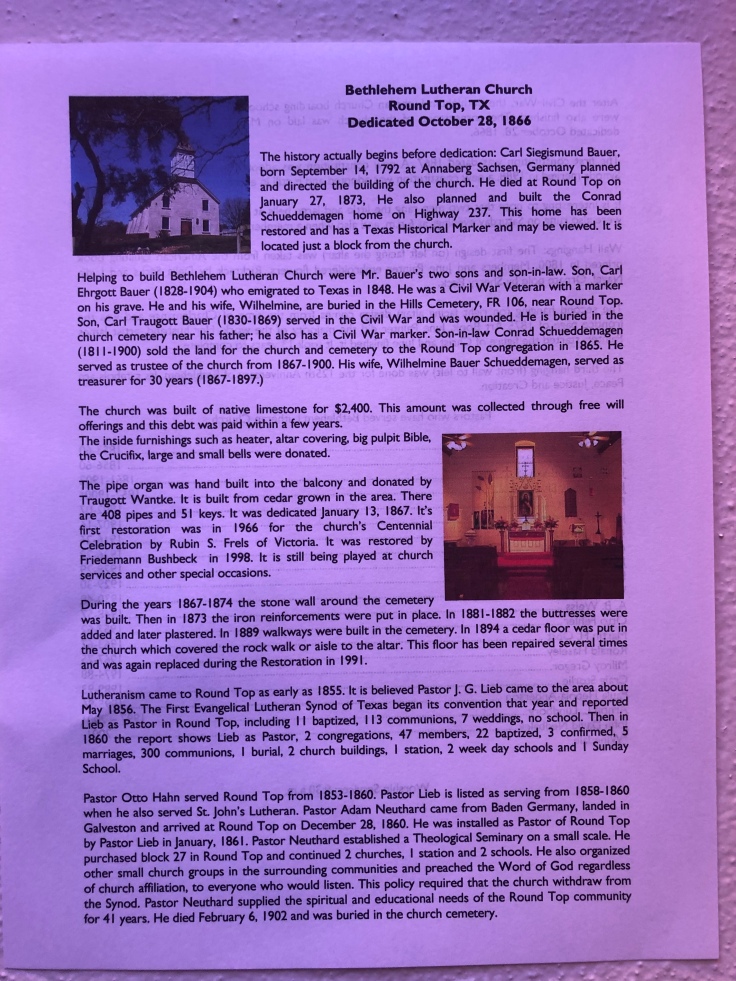 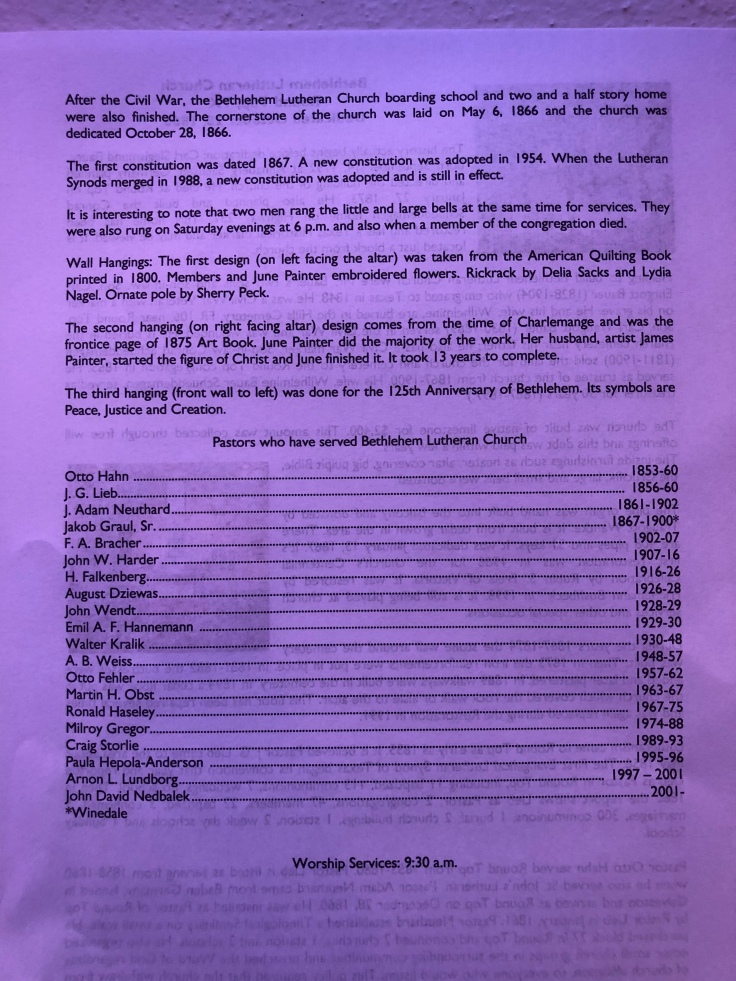