Acts 2:14a, 22-32 – Peter’s Pentecostal Sermon (part 1). This man, handed over to you according to the definite plan and foreknowledge of God, you crucified and killed by the hands of those outside the law. But God raised him up, having freed him from death, because it was impossible for him to be held in its power.

1 Peter 1:3-9 – Although you have not seen him, you love him; and even though you do not see him now, you believe in him and rejoice with an indescribable and glorious joy, for you are receiving the outcome of your faith, the salvation of your souls.

John 20:19-31 – When it was evening on that day, the first day of the week, and the doors of the house where the disciples had met were locked for fear of the Jews, Jesus came and stood among them and said, “Peace be with you.” After he said this, he showed them his hands and his side. Doubting Thomas: “Unless I see the mark of the nails in his hands, and put my finger in the mark of the nails and my hand in his side, I will not believe.” Jesus said to them again, “Peace be with you. As the Father has sent me, so I send you.” When he had said this, he breathed on them and said to them, “Receive the Holy Spirit.”

One who has hope lives differently.
– Pope Benedict XVI

There is a lot of good stuff in this text: 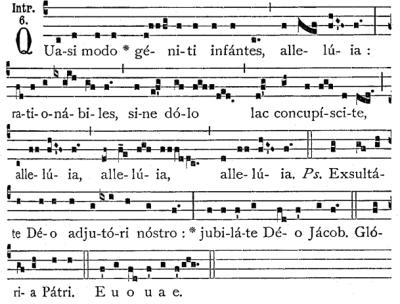 This probably won’t preach, but the erudite might be interested to know that this Sunday is also known as Quasi Modo Sunday, after the introit for the day: Quasi modo geniti infantes,  rationabile, sine dolo lac concupiscite ut in eo crescatis in salutem si gustastis quoniam dulcis Dominus, meaning, “As newborn babes, desire the rational milk without guile, that thereby you may grow unto salvation: If it be that you have tasted that the Lord is sweet.” (1 Peter 2:2-3) Quasimodo in Victor Hugo’s Hunchback of Notre Dame is so named because he is left at the cathedral on the Sunday after Easter 1467.

This coming Sunday is also called Octave Sunday, as it is the eighth day after Easter. In the Eastern Rite, the hymns sung on each of the eight days following Easter had the same tone. The eight days were to be considered as a single day or celebration.

Holy Humor Sunday is an old Easter custom that was started by the Greeks in the early centuries of Christianity.  “For everything there is a season… a time to weep and a time to laugh.” (Eccl. 3: 1, 4)

Churches in 15th century Bavaria used to celebrate the Sunday after Easter as Risus Paschalis (‘God’s Joke’ or ‘The Easter laugh’). Priests would deliberately include amusing stories and jokes in their sermons to make the faithful laugh.  After the service, churchgoers and pastors played practical jokes on each other, drenched each other with water, told jokes, sang, and danced. It was their way of celebrating the resurrection of Christ – the supreme joke God played on Satan by raising Jesus from the dead.

The observance of Risus Paschalis was officially outlawed by Pope Clement X in the 17th century. Perhaps people were having too much fun.

Today many churches celebrate the grace and mercy of God through the gift of laughter and joy. Others call Easter 2 Holy Humor Sunday. Some churches decorate their sanctuaries with helium-filled balloons with joyful Scriptural messages, cardboard butterflies (a symbol of the resurrection), smiley faces, and posters emblazoned with messages like, “Christ is Risen!  Smile!”

How often has fear kept us from the good that God wants for us? How often have I been imprisoned by nothing but my own fear? Franklin D. Roosevelt (“FDR”) said, “We have nothing to fear but fear itself.” This is strikingly true. Fear is the enemy to any system. If I am playing an organ recital and become afraid of making mistakes, that fear will lock me up, and I will certainly make them. If I am ice skating and am afraid, I will tighten up and not jump freely.

Thinking on a national level, fear, following 9/11, caused us to rush headlong into a war in Iraq. Fear of terrorism has caused us to lock our doors as a country to the world’s most needy.

Fear keeps us from becoming what God has called us to be. It paralyzes us, making risk impossible. A boat may be safest in the harbor, but that’s not what boats are built for. I wonder how fear might paralyze a congregation from starting a ministry into which the Spirit is calling.

Jesus’ response to fear is peace. We hear the words, “Peace be with you,” three times in this text today. When something is said three times, it must really be important.

Peace permeates the Christian gospel. At Jesus’ birth the angels sing, “Glory to God in the highest, and peace on earth…” In the Sermon on the Mount Jesus says, “Blessed are the peacemakers.” In our penitential rite, the Kyrie, we pray, “In peace, let us pray to the Lord… For the peace from above, and for our salvation… For peace in the whole world…” We offer that word of peace to one another in worship each Sunday, sometimes thoughtlessly. I wonder if we appreciate the power of saying a word of peace to another person. When anxiety is high, for whatever reason, don’t we need to hear a word of peace? And so Paul says to let the peace of Christ rule in your hearts. What would our day be like tomorrow if we prayed constantly for the peace of Christ to rule in our hearts?

Every year, all three years of the Revised Common Lectionary, the Sunday after Easter, we get Doubting Thomas and John 20. I wonder why they felt it important enough to include every year. Perhaps they sensed Easter left us wondering. Nancy Rockwell says, “Like a breath of fresh air, Doubting Thomas enters the over-lilyed atmosphere of Easter.”

I wonder why Thomas wasn’t Thomas with the disciples on Easter evening. Where was he? Why not all locked up in fear like the rest of the posse? Maybe he’s not as afraid. Not so easily spooked. Remember, it was Thomas who urged the disciples to go on to Bethany despite the danger: “Thomas, who was called the Twin, said to his fellow-disciples, ‘Let us also go, that we may die with him.’” (John 11:16) Maybe he was the disciple with moxie. This doesn’t sound like the voice of one with no faith.

When the poetic Jesus of John’s gospel (and so many cinematic productions) says mystically, with dramatic sound track in the background, “And ye know the way, whither I go…” It’s Thomas who interrupts, “Wait. Time out. Stop the music. We do NOT have a CLUE where you are going. We do NOT know the WAY, mostly because you’ve been speaking in riddles and Elizabethan English (sic). So why don’t you just cut the mumbo jumbo and tell us plainly what the heck you’re talking about? (My paraphrase) Thomas is a bottom-line kind of guy. #respect

So what if we embraced the Thomases in our communities? What if we welcome in the naysayers and give them their say. Listen. Affirm. “You have a good point there.” Let them experience not our disdain and arguments, but instead our openness and love? Martin Luther: “Only God and certain madmen have no doubts.”

In the three congregations I served, when we were doing our best evangelism, there were lots of doubters. I mean lots. Spiritual seekers looking, and often asking the strangest questions. If you pretend to have all the answers, you’ve lost them. Arrogance and hypocrisy are not of the Reign of God. Kids of stalwart members who confided in me, “I don’t believe in organized religion.” But then they’d go on the mission trip because they knew something important was happening here. Confirmands would “shock” me with their professed atheism, anarchism, or nihilism. Unbelieving spouses of members, who would help with a meal, mow a widow’s yard, serve a meal to the homeless folks living in our building. One spouse told me he was a Buddhist, yet he would come and meditate during worship, then comment on the sermon as he shook my hand. We’re all at different places in our journey toward Christ.

Pastor: As the Father has sent me, so I send you.
People: Thanks be to God.

This is John’s version of the Great Commission (Matthew 28:18-20). The church is always sent. We are healed not to sit, but to serve.

How was Jesus sent? To proclaim Good News to the poor and to engage in a healing ministry in the community. Invite the congregation to read the gospel of Matthew and ask the questions, “Where is Jesus? What is he doing most of the time?” As Jesus was sent to do these things, so are we. It might be a good thing to remind the congregation each week. They are sent out into the world to be a word of peace and hope.

This little bit of Johannine Pentecost gets lost in the clamor to deal with Thomas. Pentecost, Acts 2, is part of Luke’s volume 2. For John, the Spirit is given right here, on the first day of the week, Easter Sunday. Easter is Pentecost in John.

Remember, John begins his gospel, evoking Genesis, with “In the beginning was the Word…” In this passage, John again calls upon an image from Genesis. After forming adam from the dust of the ground (Genesis 2), Yahweh “breathed into his nostrils the breath of life; and the man became a living being.” In Hebrew, breath and spirit are the same word: ruach, ר֫וּחַ.

In Ezekiel 37, the Valley of the Dry Bones, Ezekiel prophesies: “Thus says the Lord God to these bones: I will cause breath to enter you, and you shall live.” (37:5) Breath/Spirit is essential for life. Without that breath, we are dust. Ezekiel continues:

So I prophesied as I had been commanded; and as I prophesied, suddenly there was a noise, a rattling, and the bones came together, bone to its bone. I looked, and there were sinews on them, and flesh had come upon them, and skin had covered them; but there was no breath in them. Then he said to me, “Prophesy to the breath, prophesy, mortal, and say to the breath: Thus says the Lord God: Come from the four winds, O breath, and breathe upon these slain, that they may live.” I prophesied as he commanded me, and the breath came into them, and they lived, and stood on their feet, a vast multitude.

Jesus gives breath/life/power. “They have received the call to go. They don’t have to go it alone,” says Disciples of Christ Pastor Robert Cornwall.

Anyone who has been involved in ministry very long knows how taxing it is. You will run out of steam pretty quickly. In the church, nothing gets done without the power of the Spirit, the Spirit that hovered over the face of the deep in Genesis, that was in the beginning, the Spirit present at Jesus’ baptism, that drove him into the wilderness, that anointed him to preach Good News to the poor. That Spirit still anoints us today.