Reconnecting with God through Nature 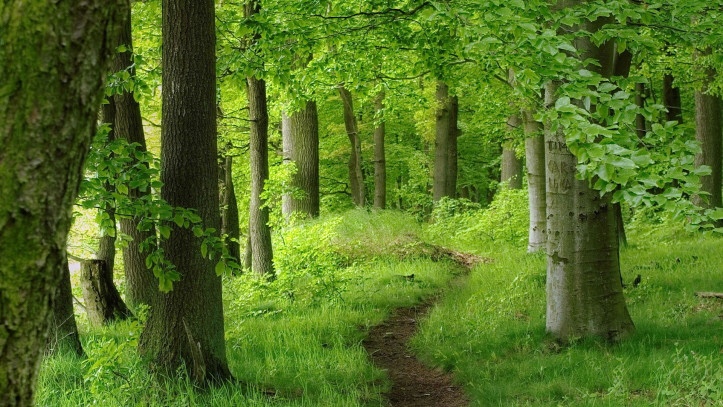 I remember the day like it was yesterday. When I close my eyes, I can feel the morning sun on my taut adolescent skin. I am instantly twelve again. Hopping on my bike — that glistening symbol of mobility and freedom — my muscles and my mind anticipate the adventure awaiting me on the hot summer day. I know not where I will go, but only where I will start: the path that leads mysteriously into the woods at the end of my street. I will go as far as my legs can take me, then return.

“Go play,” my mom had said. In an era of boundless freedom for children, as long as I was home by the time the lawn lights came on, all was well. I was free.

My bike bounced over the protruding tree roots along the trail. The path forked from time to time. Like the Frost poem, I randomly chose one path over another, giving little thought to how I would find my way back. The sea of green was balm for the soul. The smells of the forest were intoxicating. I lost complete track of time. There was no time. No school. No chores. Eternity in a microcosm.

Eventually I saw the light of a clearing ahead. My legs tired, I looked forward to taking a break and eating the lunch I had packed. When I emerged from the woods, I skidded my bike to a halt. What I saw was entirely unexpected.

Many treks through my childhood woods had led me to many places, but I had never seen this place before. Before me was a huge pasture of black-eyed Susans as bright as the sun. It stretched out to a distant tree line. I dumped my bike and waded into the knee-deep ocean of yellow, touching the petals with both hands and watching the honeybees hop from flower to flower. It was a sensory symphony. If only I could still visit there today. The memory in my mind’s eye will have to do. 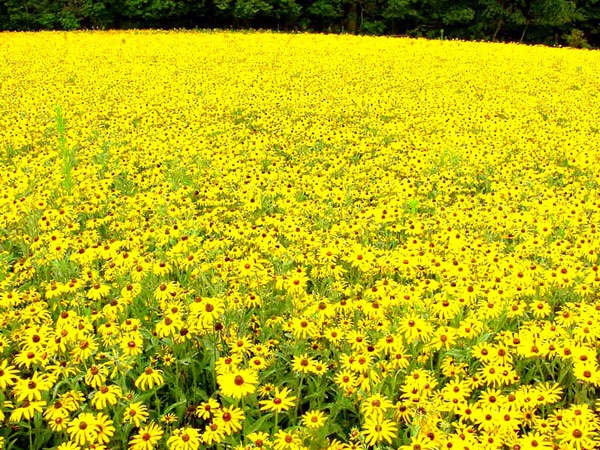 I ate lunch on a patch of grass in the middle of that ocean, then laid on my back watching clouds for an eternity. Eventually I got up and began to make my way home, in no particular hurry. I got quite lost, emerging from the woods into unfamiliar neighborhoods, having to double back several times, but eventually made it home, in plenty of time for dinner.

To this day I have no idea where this place was. In subsequent years, I searched several times, but never found it again. Not long after that, construction began on an interstate bypass which officials boasted would shorten commutes. A neighborhood was built at the dead end.

Recently, I was revisiting my childhood hometown. Driving to the dead end, which is no longer a dead end, I followed the road, through neighborhood after adjacent neighborhood in a vast suburban sprawl. I wandered around the elementary school to which I had walked every day as a child, taking a moment to swing on the swings. I drove around in my car, wondering where the pasture was, nearly a half century after that day.

My kids did not have the same range of play that I did. I walked from my back yard into the woods. I jumped from rock to rock in the creek, catching tadpoles and frogs. I “wasted” untold hours in that woods, in a world of imagination, accompanied by raccoons, rabbits, squirrels, deer and an infinite variety of bugs.

Urbanization has drawn people into cities for jobs, technology, access to medical centers and the arts. 80% of Texans now live in metropolitan areas. Even though I live in a small ex-urban town, my kids still did not have the freedom to roam that I had. Our safety concerns and heightened awareness of predators probably made us a bit too cautious. Cities are beginning to pay more attention to the importance of green space, but in some cases it’s too late. There’s not much left.

This time of year our churches are signing up for summer camp. Camp is a respite in a world of constant electronic distractions. Leaving the cell phone behind is more of a counter-cultural experience than ever, for kids and adults alike. A week with no screen time? Is this possible? Reconnecting with nature makes space to reconnect with God, the earth, and one another.

Those who live in rural and small town areas are blessed with a closeness to the land, the animals and the past. The majority of Americans, however, rarely drive on dirt roads or walk on dirt paths. The loss of Sabbath means we have little time to get lost in the woods.

In his book The Last Child in the Woods, Richard Louv shares information that suggests exposing children to nature is a therapy that can impact attention-deficit disorders. Our mental, physical and spiritual health depends on it.

When I wrote my little book on prayer, Learning to Pray Again, I chose a path through the woods as the cover. Prayer is not a drab ascetic chore, but a soul-restoring walk through the woods. It is not escape from the world, but rather the restoration of our connectedness with it.

I write to lift up the importance of our camps and outdoor ministries, which are are a powerful experience in the lives of children and adults alike. I recount these memories to remind myself to take Sabbath, to make time to get lost in the woods, and to disconnect from the machines that too often rule our lives.

The Lord is my Shepherd, I shall not want

He makes me to lie down in green pastures

He leads me beside still waters

He restores my soul…