Acts 8:26-40 – Philip baptizes the Ethiopian eunuch on the road to Gaza reading the suffering servant from Isaiah.

1 John 4:7-21– Beloved let us love one another for love is of God… whoever does not love does not know God, for God is love

John 15:1-8 – I am the vine; you the branches, that you might bear fruit. By this my Father is glorified: that you bear fruit. 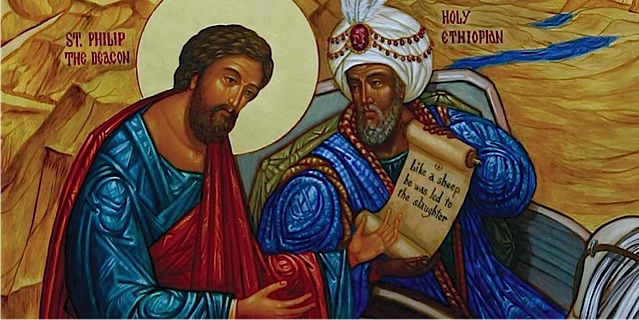 The texts this week are enticing.

In John 15, Jesus is the vine, God is the vine-grower and we are the branches. The branch cannot bear fruit unless it abides in the vine. The branch cannot bear fruit apart from the vine. God is glorified when we bear fruit. The text begs the question, what fruit are we bearing? Our lives? Our communities? Our churches? What fruit would you like to bear? Jesus says, “You shall know them by their fruit.” What does the “fruit” of your life, or your congregation, say about who you are?

Both of these texts, above, are pregnant for preaching. Acts 8, however, calls to me.

I love this story of the Ethiopian Eunuch in Acts 8. Easter 5B is the only time it comes up in the lectionary. We won’t hear it again for three years. If you are hearing this story for the first time, it may raise your eyebrows, but if you’ve heard it before, I want to encourage you to hear it with new ears, see it with new eyes. Watch how the Spirit is working in their place and their time, and then ask yourself, how is the Spirit working here in this place, and in this time?

Acts is written by the same person who wrote the gospel of Luke. Luke is a careful writer. He has the best Greek in the New Testament. He knows his is not the first gospel. In fact, he says in Luke 1:1 that many have already set out to write down all the things that have taken place. He tells us he is writing an orderly account for a guy named Theophilus, (which means “lover of God”). This was a word that was often used, along with God-fearer, for people who believed in God and were seekers, but had not yet converted to Judaism. It is possible that Luke is writing to a person named Theophilus. It is also possible that Luke is writing for all seekers, all lovers of God. Could it be that Luke is uniquely relevant for a postmodern, spiritually hungry generation?

Acts begins with the words, “In the first book, Theophilus, I wrote about all that Jesus did and taught…” The first book was about Jesus. This second book is about the Apostles. It is the Acts of the Apostles. “Apostle” means one who is sent. You see the word “post” in apostle. Jesus sent out his disciples, and they became apostles – the ones sent out. The early church read from the Old Testament, from the memoirs of the apostles, and from the good news of Jesus. Salvation was not something to be hoarded. It compelled and impelled. We are saved to be sent.

Acts paints a picture of the Spirit working in the post-resurrection, sent church. The outline of Acts, the theme verse if you will, is 1:8, “But you will receive power when the Holy Spirit has come upon you; and you will be my witnesses in Jerusalem, in all Judea and Samaria, and to the ends of the earth.”

Jerusalem is where Pentecost takes place. Judea is the surrounding area. Samaria is the place of those heretic Samaritans. The ends of the earth is the whole Roman Empire.

In Acts 2 we have the Jerusalem Pentecost. In Acts 8 we have the Samaritan Pentecost. Philip goes to Samaria and preaches. I don’t think this is the same Philip who was a disciple of Jesus. He is the Philip that is elected a deacon in Acts 6. Philip preaches, and even Simon the Magician believes and is baptized. So the apostles Peter and John come down, lay hands on them and they receive the Holy Spirit. Even Samaritans receive the Holy Spirit!

I will pour out my Spirit on all flesh…

Remember? You will be my witnesses in Jerusalem, Judea, Samaria and…
all the ends of the earth. We start with Ethiopia, but later we will have a Roman Centurion. To this day, the Ethiopians know they were the first outside the Holy Land to receive the gospel.

An angel of the Lord comes to Philip and tells him to go down to Gaza. You know of the much-embattled, and sadly forgotten Gaza strip from the news. When have you been open to the prompting of the Spirit in your life, to go some place new, do something different? Are you open to that possibility now, right this very minute?

We know three, and probably four, things about him immediately. He is Ethiopian. He is a court official. He is a eunuch. He is likely Jewish, though perhaps a seeker, a lover of God.

Ethiopia is a country located in the horn of Africa, south of Egypt. Incidentally, the Ethiopian Lutheran Church is the second largest Lutheran church in the world.

Ethiopia is the most-populated country in Africa with over 90 million people. Ethiopia was a dynasty for most of its history, dating back to the 2nd century B.C. The oldest traces of humanity have been found here. It is an ancient, ancient land. And beautiful. Some of the most fertile soil in the world. There are twice as many Christians as Muslims in Ethiopia, and there are more Lutherans in Ethiopia than there are in the ELCA. Think about it, this man may have been the very first African baptized. He is certainly the first convert outside of Jerusalem, recorded in Acts.

Court official: We are told the Ethiopian eunuch is a very important man. He is a court official for Candace, Queen of the Ethiopians. He is in charge of the treasury. Shades of Joseph? Ethiopia is mentioned many times in the Bible (sometimes as Cush), but this is the only place Candace is mentioned. Candace is a family name, referring to a dynasty of Ethiopian warrior queens.

Eunuch: We are told the man is a eunuch, which means he was castrated. Why castrated? Because sometimes court officials fall in love with royalty, and if something happens, you don’t want potential heirs to the throne running around. So royalty in many cultures tended to use eunuchs.

A eunuch for the royal court would have been chosen at an early age. The child would be chosen, and castration would be carried out in his childhood, without his consent. It is a hard and horrific thing to imagine, being taken like this as a child, and castrated. This is a classic example of human rights abuse, but when dealing with the powerful, what choice do the powerless have? Did his parents give consent? Were they paid? Did he know what was happening? Did he cry out, at the pain, at the injustice, at the abandonment of his parents?

Jewish: Finally, we know that this man is probably Jewish. We are told in verse 27 that the Ethiopian eunuch had come to Jerusalem to worship at Passover, and he is sitting in his chariot reading the Prophet Isaiah. Why would you go to Jerusalem to worship, unless you were a Jew? He was probably there for the feast of Pentecost with all the other people from the ends of the earth: Parthians, Medes, Elamites, and residents of Mesopotamia, Judea, Cappadocia, Pontus and Asia…

The thing is, he can go all the way to Jerusalem to worship. He can approach the Temple, but he cannot go in. His castration disqualified him. According to Deuteronomy 23:1, he is not a full man. He is of questionable sexuality. He is unable to enter the assembly of the Lord. “No one whose testicles are crushed or whose male organ is cut off shall enter the assembly of the LORD.” It is noteworthy that many of the people Jesus hung out with were also unwelcome in the Temple: women, lepers, tax collectors, the blind, the lame…

Imagine that you were castrated against your will at a very early age and then you stumble across this text from Isaiah. Hear it through his ears:

Can you imagine how the eunuch hears this passage? He must identify with the suffering Servant who will also be without descendants, whose life is taken from the earth. How old was he when he was robbed of his descendants? Did he know what was about to happen to him? Did he understand what it meant? Did he open his mouth and cry out, or was he silent, like a lamb led to the slaughter?

Here Luke gives us a glimpse of the power of the gospel in an empire where most people were slaves. They identify with the Suffering Servant, and he with them.

The Ethiopian man asks Philip, “Who is the prophet talking about? Himself or someone else?” So Philip told him about Jesus, the Suffering Servant. Jesus is the paradigm for all the innocent who suffer unjustly at the hands of the powerful. This is the good news, that God is on the side of those who are suffering. There is healing in the cross of Christ, in ways we cannot even begin to imagine.

The love of God is poured out for Jews, Gentiles, Samaritans, Roman Centurions and even, yes even eunuchs. What things in your life have sometimes led you to believe God was not on your side? What mistakes, yours or others have separated you from God? How might Jesus be reaching to you across that barrier?

The first convert to Christianity outside of Jerusalem is a black, Jewish, sexual minority.

Think about that for a moment. In a world that divides, the gospel unites all people, of all walks of life. In Christ, there is no longer Jew or Greek, slave or free, male or female, for we are all one in Christ Jesus our Lord. (Gal. 3:28)

Jesus is the hero for all who suffer, in body, mind or spirit.

The Spirit of the Lord is upon me!
Because he has anointed me to preach good news to the poor.
He has sent me to proclaim freedom for the prisoners
and recovery of sight for the blind,
release to the oppressed!

Who out there needs to hear that word of grace and hope today?

To whom is the Spirit leading you, as it led Philip?

To whom are you going to proclaim a word of God’s radically inclusive love this week?

Are you open to the Spirit?