I arrived at my high school social studies class one day to discover we were watching footage of the liberation of the Nazi concentration camps. I had heard of such things, but this was the first time I had seen the footage, which turned my stomach. I felt an anger rising within me. Our teacher said we must never forget this. Those who don’t know their history are doomed to repeat it.

Later, I read Elie Wiesel’s firsthand account, Night. It was the first book I had ever read that made me bawl.

No one likes to rummage through the horrific history of the sins of the past. History repeats itself, however, and therefore we must not whitewash that history.

Recently I visited the National Memorial for Peace and Justice, the so-called “lynching museum,” with some friends. This memorial is located in Montgomery, Alabama, situated in Montgomery County. This memorial tells the truth about racial terror in the U.S. we must never forget, because those who do not know their history are doomed to repeat it.

This memorial opened in April of 2018. The center of the six-acre area features 800 large steel blocks etched with a county where lynching occurred. Those lynched in that county are also listed. Understandably I paid close attention to the counties in Texas, where I live. Here are some photos. The last is closest to home for me. 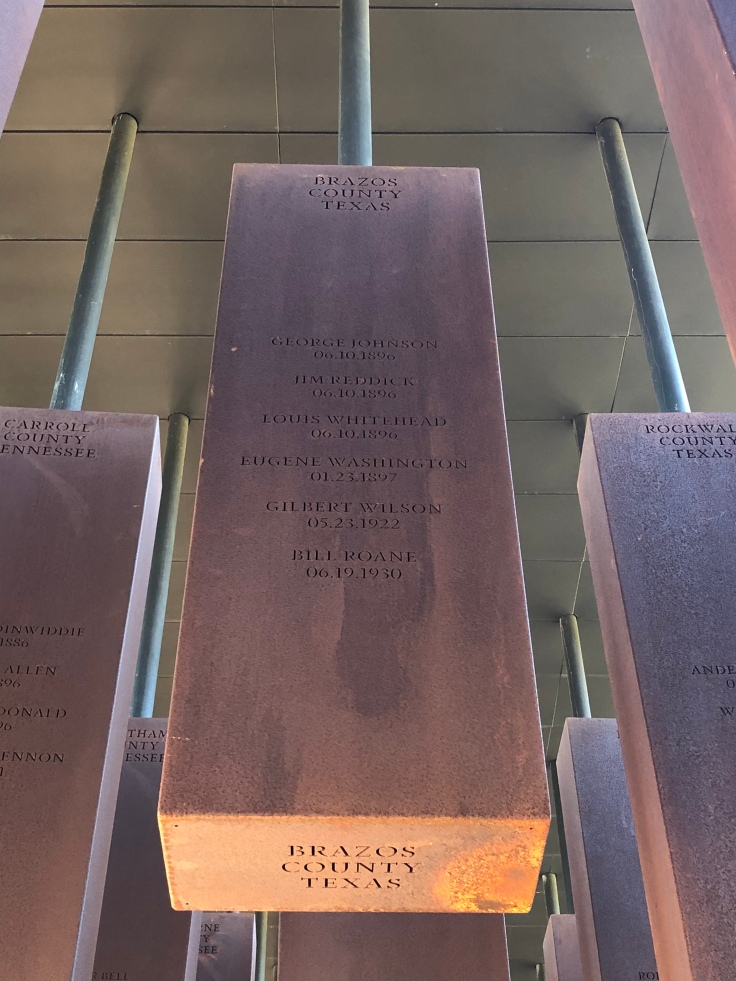 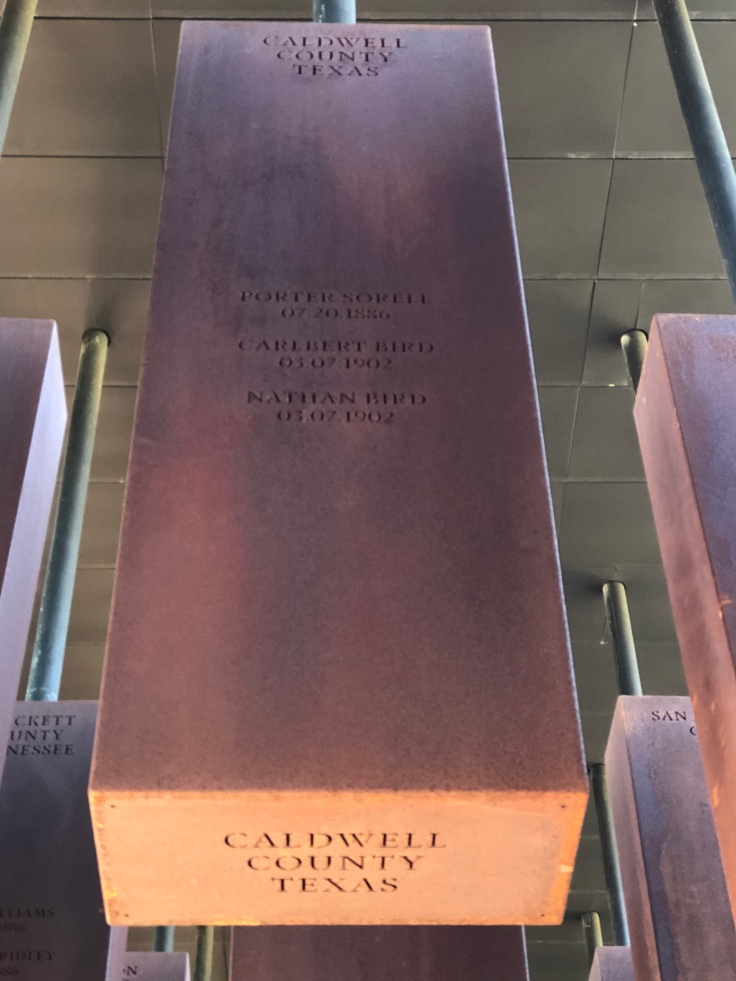 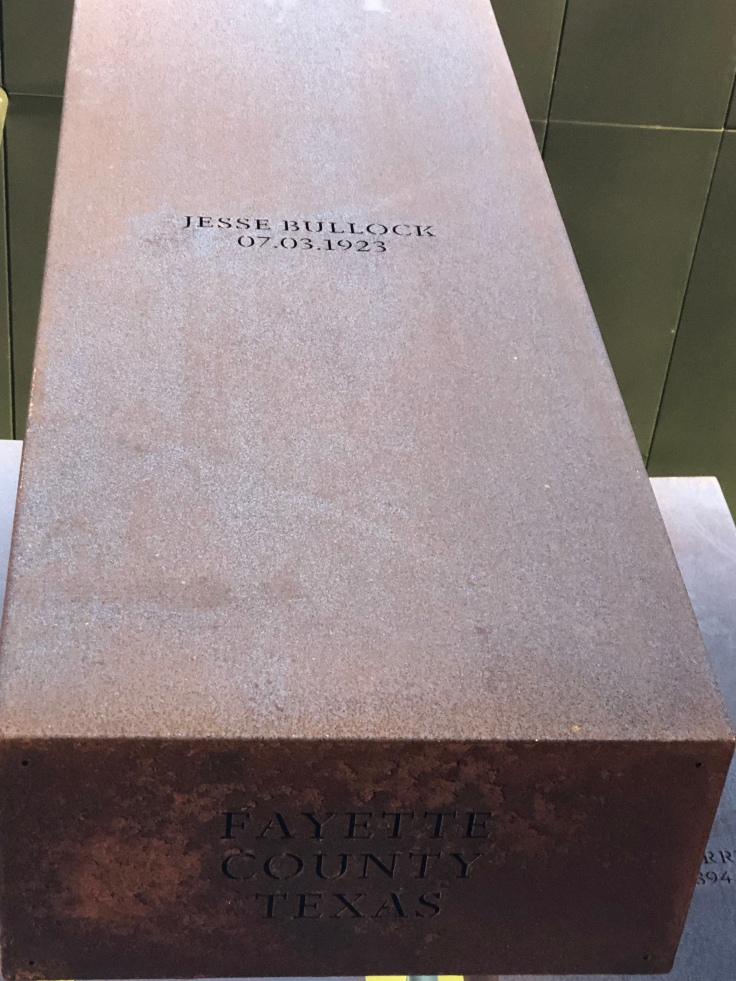 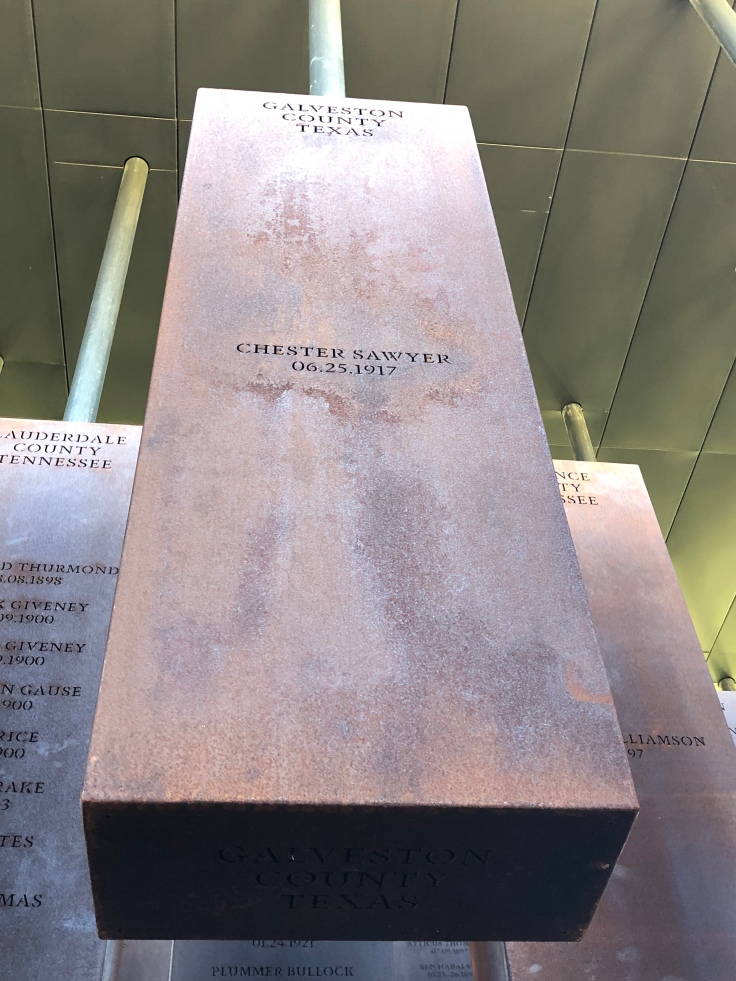 When I returned to my home, also in another Montgomery, Montgomery Texas, also in Montgomery County, I decided to learn more about these six men. What I learned was never taught to my children, though they both went to school here, and did the required reports on local history. What I learned only scratched the surface, of what we must remember.

I already know a thing or two about lynching. Lynchings increased across the South after the Civil War as Reconstruction ended and Federal Troops were withdrawn. They were a way to reinforce white dominance, with the use of fear and racial terror. Black men were raped for crimes such as looking at a a white woman.

Lynchings were often public. Thousands were known to attend. Hot dogs were sold. Postcards if the lynching were sold in a carnival-like atmosphere. They were sometimes announced before the victim was chosen. Fingers and other parts were cut off and passed around as souvenirs. Victims were hung, shot and then burned, without a trial.

Before starting this journey, I went to the front yard of my own church, Tree of Life Lutheran Church. Tree of Life is built on property, some of which was purchased from two African American families who have family burial sites there. Our church has cared for those graves and curated the space around them. I wondered if any of the six names would be there. They weren’t. I have requested an appointment with a local Baptist minister where these families worshipped to see if I could learn more. Look for a subsequent post on this topic later this year.

As I dug into the six names, I braced myself for what I would learn. My journey took me through many articles and web sites. By far, the most helpful was http://www.lynchingintexas.org, a website dedicated to document the recorded lynchings in Texas that took place between 1882 and 1942. They are up to about 500 people.

On December 19, 1885, a 19-year-old man named Andy/Bennett Jackson was accused of breaking into a white man’s house and attacking his wife and children. He was killed before a large crowd, at what the papers described as a “lynching picnic” on the Conroe Courthouse Square in Montgomery county, by a crowd who waited for District Court Judge Masterson to leave town for Houston, so the picnic could take place. The event was advertised 48 hours in advance, in the Houston Post. Jackson was identified by a description of a little girl just before she died. He was convicted, sentenced and executed by “Judge Lynch.”

Andrew/Frank McGehee was shot to death “by persons unknown” in his cell, in Willis, Texas, after the Marshall had gone home. He was accused of shooting a white man, after an altercation, caused because McGehee wouldn’t “move aside in a narrow passageway.” A mob overpowered the guard and shot McGehee and another man to whom he was chained.

Charley Scott was a “feeble minded” man found in a woman’s back yard. He was accused of “attempted rape.” He was found hanging from an elm tree near the Montgomery County Courthouse in Conroe, with a sign “Warning to negroes found prowling in white folks homes.”

It’s fascinating how many articles describe how people gathered quietly, how orderly the mob is, how guilty and carefully warned “negroes” are. 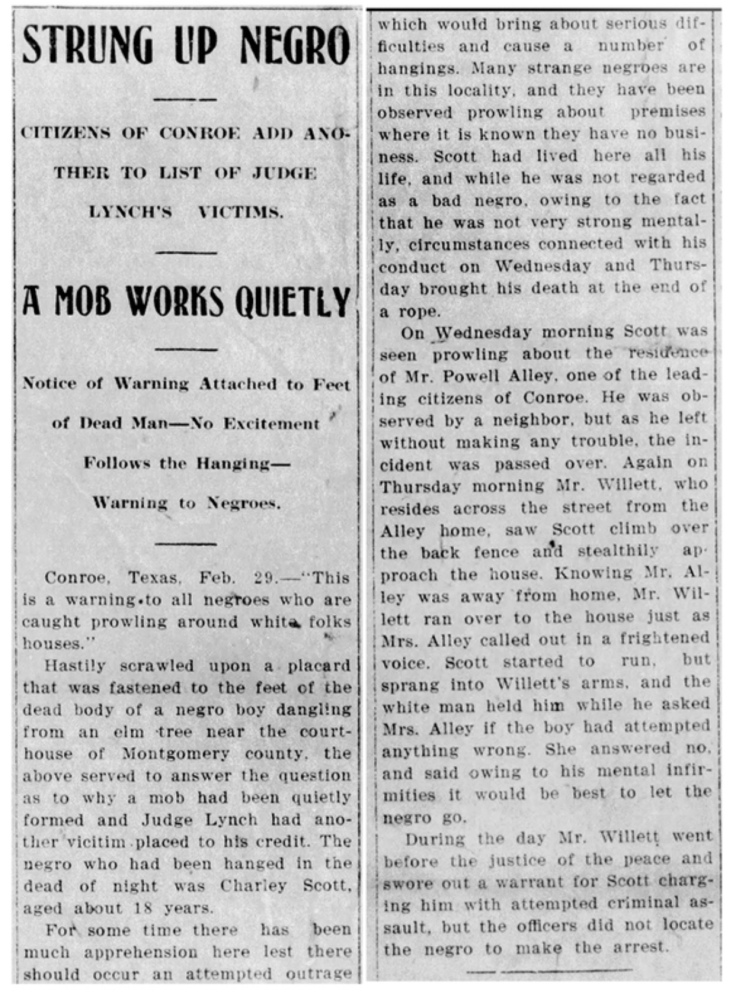 On May 20, 1922 at 4 o’clock in the afternoon, Joe Winters was dragged into the Conroe Courthouse square, where he was burned to death  . A girl had accused him of rape. African Americans at that time insisted that the two were dating, and that she betrayed him when caught in the woods. The Montgomery County Sheriff reported “being overwhelmed by the mob.” He was chained to an iron post, soaked with gasoline and set on fire, while thousands of men, women and children watched. Of course, no trial was held. The story is told in the first three minutes of Whitewash: The Clarence Brandley Story.  

One month later, on June 23, 1922, an 18-year-old “mentally retarded” boy named Warren Lewis was hanged by a Montgomery County mob of 300 people. A field hand, Lewis was accused of going to a white woman’s house and attacking her. The Montgomery County Sheriff said that by the time he arrived it was “too late to save him.” There was, of course, no trial.

Tom Payne was charged with fighting with a white man, cutting him and robbing him. He was being taken to Huntsville for “safekeeping” when a mob of u known persons surrounded them. Attempts to identify the mob were unsuccessful according to Montgomery County Sheriff Ben Hicks.

Well, that’s what I discovered. And this is just one county. Moreover, these are the ones we know about. There are many more stories from that era, but no clear citations.

For example, James Kinder and Alf Riley were cornered by a crowd in Magnolia Texas on March 17, 1908 and accused of flirting with a white girl. The two men were shot to death in the street. The sheriff arrived said that when he arrived it was too late to do anything about it. No charges were filed.

In another story, Clem Scott was seized by a group of white men and hung from an elm tree in the Montgomery Courthouse Square in Conroe. Sherriff Mayben Anderson and deputies took no action to stop them. Justice of the Peace CT Derby held an inquest and declared that Scott had been “hung by the neck with a rope in the hands of persons unknown.”

In June of 1941 Bob White was accused of raping Ruby Cochran in Livingston. He was convicted by an all-white jury. After it was revealed he was one of sixteen men who had been taken into the woods and been brutally beaten by Texas Rangers to exact a confession, the U.S. Supreme Court overturned the conviction. His confession had been written by someone else, with many factual errors. He was consequently arrested again and charged. He went on trial three times. Dude Cochran, Ruby’s husband, shot him in the head during the third trial. Cochran was released $500 bail. At his trial even the District Attorney recommended a verdict of “not guilty,” which of course happened.

In 1940 Dennis Brandley meticulously saved, and amassed 30 acres of land, unusual for a black man in the ’40s. Then he did the unthinkable: He put a fence around his property. A white man, who everyone knew, shot him to death in Conroe. The man was never even arrested. 40 years later, his grandson would experience a more updated form of racist injustice: Whitewash: The Clarence Brandley Story.  

There have been numerous disturbing events since the lynching age. In 1973 Greg Steele, who had been threatened because he was dating a white girl, was arrested in a bar room scuffle. He was shot to death in the Montgomery County Courthouse two days before Christmas. An officer was charged and found not guilty.

In 1981, Clarence Brandley (grandson of the aforementioned Dennis Brandley)  was convicted of raping and murdering Cheryl Lee Fergeson. Brandley was working as a janitor supervisor at Conroe High School. Fergeson was a visiting 16-year-old athlete from Bellville High School attending a volleyball tournament. She was strangled to death. Her body was found in the loft above the Conroe High School auditorium.

The white janitors all gave one another alibis. Texas Ranger Wesley Styles told them, “One of you is going to have to hang for this” and then, turning to Brandley, added, “Since you’re the nigger, you’re elected.”

There was no physical evidence linking him to the crime. Blood was found on the Fergeson that was neither her’s nor Brandley’s.

The first trial was declared a mistrial. The all-white jury said he was guilty, except for one person, who said there was no evidence. Afterwards, he received threatening phone calls calling him a “nigger-lover.

At the second trial, one witness for the prosecution from the first trial refused to testify, because he had changed his mind and no longer believed the other custodians’ conflicting account of events.

Brandley spent nine years on death row. He was freed by a Supreme Court decision that forced MONTGOMERY County to drop charges in 1990. Evidence (Caucasian pubic hair) had mysteriously been stifled and later disappeared altogether. Another suspect, Robinson, a white janitor, told a friend he had done it. This was not presented to the defense. Later it was found Robinson had Type A blood, the type found on Fergeson’s blouse.

The events are the foundation of a book: White Lies: Rape, Murder and Justice Texas Style, by Nick Davies, as well as the 2001 movie that you can watch on YouTube: Whitewash: The Clarence Brandley Story.  

Brandley was denied compensation from the state fund for wrongful conviction. He was the third person in history to be released Death row exonere Clarence Brandley Dies…from death row in Texas. He was ordained a Baptist minister, settled in the country, founded a church, and then died last year on September 2, 2018, at the young age of 66.