Revelation 7:9-17 – The host arrayed in white at the throne: They will hunger no more, and thirst no more; the sun will not strike them, nor any scorching heat; for the Lamb at the center of the throne will be their shepherd…

John 10:22-30 – My sheep hear my voice. I know them, and they follow me. 28I give them eternal life, and they will never perish. No one will snatch them out of my hand.

In Acts 1:8 The risen Christ tells the disciples in Jerusalem to stay in the city where they will be clothed with power from on high with the Holy Spirit. This Spirit will empower them for this purpose: You will be my witnesses in Jerusalem, Judea, Samaria and to the ends of the earth. This theme verse provides the structure for the rest of Acts. We start in Jerusalem, then moving next to Judea. By Acts 8 we have moved to Samaria. Soon we will hear about Paul’s missionary journeys to the ends of the earth.

Last week we heard about Paul’s conversion. He later narrowly escapes Damascus with his life, being lowered out of the city in a basket. Luke then has him going to Jerusalem (conflicting with Paul’s own account which says he spent three years in the desert prior to meeting with the disciples – Galatians 1:15-20). The disciples are afraid of Paul, but finally let him in when they learn that he too has had an encounter with the risen Christ.

We are told in Acts 9:31, just prior to where today’s text begins,

Meanwhile the church throughout Judea, Galilee, and Samaria had peace and was built up. Living in the fear of the Lord and in the comfort of the Holy Spirit, it increased in numbers.

The church “increased in numbers.” It always amazes me when some folks don’t want to look at numbers. The Scriptures do. Jesus fed the 5,000. Peter baptized 3,000. In Acts, several times Luke celebrates that the church increased numerically.

The narrative next turns to Peter in Lydda and Sharon, then Joppa. Joppa, mentioned four times in the Old Testament, is a Mediterranean port city on the western coast of Israel. Today it is known as Jaffa. Legend holds it was named for Japheth, son of Noah, who built it after the flood. It is the city to which Jonah fled and caught a ship out of Dodge when he was supposed to be going to Nineveh.

In the New Testament, Joppa is mentioned in Acts 9, 10 and 11. Peter comes across a woman in Joppa named Tabitha (Aramaic for gazelle) or Dorcas (Greek for gazelle). It is a slave name according to Margaret Williams (‘Palestinian Personal Jewish Names in Acts,’ in The Book of Acts in its Palestinian Setting). We get a glimpse of the early church: women and slaves.

People often had two names, because they lived in a multicultural world. Today in immigrant communities people often have two names as well. My friend Yinhua goes by Stuart here in Texas. Some scholars believe that Saul didn’t change is name from Saul to Paul after his conversion. He used both names all along. It was common for people who lived in two worlds to have two names. Saul was Saul in the Jewish community. Saul was Paul in the Gentile community.

In the critical essay, “Tabitha: Gazelle of Acts,” scholar Rick Strelan suggests that “gazelle,” is a metaphor for someone who operates in two worlds, in this case Jewish and Greek. Palestinian gazelles were not domesticated, but neither did they live in the wild entirely. They tended to live on the borders of civilization. Both the clean and the unclean could eat gazelle according to Jewish dietary laws (Deut. 12:15 and 12:22-23). They could not be used in temple sacrifice, but they were not unclean like pigs or shrimp. He claims that this text is subtly and artistically setting us up for Peter’s future vision of clean and unclean animals being let down on the sheet. Tabatha, like the gazelle is neither profane, nor holy. She is neutral ground. In Pentecost, God erases the distinctions.

This good, border-crossing, two-worlds disciple of Jesus became ill and died. She was washed and laid out in an upper room, reminiscent perhaps of another upper room earlier in Luke’s two-volume Luke-Acts set. When Peter arrived, there were many widows around. They were already quite acquainted with death and loss. Without a man, they were considered to have lost in the lottery of life. They have no visible means of support. Desperate, they would have to find benefactors to survive. The text tells us that they were wearing tunics that been made by Tabitha/Dorcas, their gazelle, who had most likely donated them to these poor widows. She was likely their benefactor. It’s always interesting to see who shows up for the funeral and visitation. It says something about the deceased. 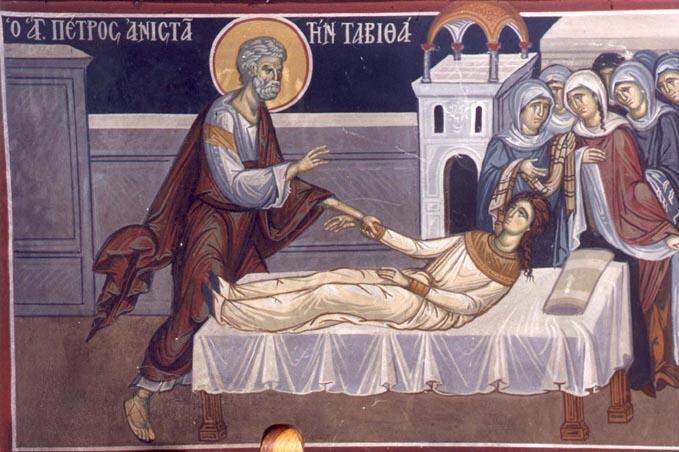 Peter escorted everyone from the room. This is not a show. He probably didn’t know what was going to happen. He knelt down and prayed, then finally said, “Tabitha, get up.” Perhaps Talitha cumi in the story of the raising of Jairus’ daughter, becomes “Tabitha cumi” in this story. One cannot help but make the comparison.

The text ends with a few closing remarks that would be easy to miss.

He gave her his hand and helped her up. Then calling the saints and widows, he showed her to be alive. This became known throughout Joppa, and many believed in the Lord. Meanwhile he stayed in Joppa for some time with a certain Simon, a tanner.

He called together what Luke calls, “the saints and the widows.” Is this an apt description of the early church? Saints are not dead people, but holy people, quite alive. Widows were a poor community eschewed by their own society, but embraced by the church, as were slaves. Then Peter goes to stay with Simon the tanner. Many tanners were tent makers. Tents were made from animal hides. This was an unclean profession. It was virtually impossible to be ritually clean when working with dead animals. It is said a tanner smelled bad all the time. Paul, Simon and others likely shared in a trade guild. They made their money in the market, but served as part time or volunteer leaders in the church. They were a community of the unclean, broken, widowed, slave outcasts. Their non-hierarchical, egalitarian community of the lower strata, the nobodies, grew. In the Roman Empire they were nobodies, non-citizens. In the kingdom of God, they were citizens with the saints.

My systematics professor used to make a big deal about the fact that this story was not a resurrection, but a resuscitation. The distinction he would make was that Jesus rose to eternal life, in a resurrected body, never to die again. He walked through walls in some accounts. That is resurrection. Tabitha, like Lazarus and Jairus’ daughter, would eventually die again. She is simply brought back to life in her current body. Peter carries on Jesus’ healing ministry in all of its manifold splendor.