And you, most kind and gentle death
Waiting to hush our final breath
Oh, praise Him! Alleluia!

Another long gospel reading, with a million sermons that could be preached. This is where we have been this Lent:

So now what are we to make of John 11 – The raising of Lazarus?

Permit me some random exegetical musings and then a playful look at art.

My favorite commentary on the Gospel of John is by C. K. Barrett, a volume bequeathed to me by my father, and published in 1958, the year he entered the seminary in Columbus Ohio. A lot of research has been done in the last 50 years, but this work holds enduring insights for me.

For example, Barrett points out that it is unlikely that John had access to the Gospel of Luke, written decades before John, but there are some striking similarities, even if not. John and Luke are the only two gospels that mention the sisters Mary and Martha. Both mention Lazarus. Consider the relationship of Luke’s parable of the rich man and Lazarus to this story.

In John’s story, Lazarus does in fact come back from the dead. It’s hard to imagine these stories are not connected somehow. Considering this, it is hard to believe John had no access to Luke’s parable.

It is evident that it was not John’s intention to write a work of scientific history. Such works were extremely scarce in antiquity, and we have seen that John’s interests were theological rather than chronological. Moreover, his treatment of the only source (Mark) we can isolate with any confidence from his gospel is very free; there is no reason to think that he followed other sources more closely. He did not hesitate to repress, revise, rewrite, or rearrange. On the other hand, there is no sufficient evidence for the view that John freely created narrative material for allegorical purposes. His narratives are for the most part simple, and the details generally remain unallegorized.

It was of supreme importance to him that there was a Jesus of Nazareth who lived and died in Palestine, even though to give an accurate outline of the outstanding events in the career of this person was no part of his purpose. He sought to draw out, using in part the form and style of narrative… the true meaning of the life and death of the one whom he believed to be the Son of God, a being from beyond history. It was for this interpretation of the focal point of all history, not for accurate historical data, that we must look in John. Yet at every point history underlies what John wrote. The reader is reminded of ancient Egyptian figure drawing…

I often try to describe the Gospels as works of art. When one looks at a Rembrandt, one can ask the question “is this historically accurate?” The answer is difficult. Yes, the event actually took place. But did the people look like that? Were they dressed like that? Were they standing precisely there? Did it happen with Renaissance landscapes in the background? No. The Gospels, like art, are interpretations, with a very mild nod to history.

This is to say, Barrett would suggest, the story in John 11 is an important theological statement about who Jesus is and a foreshadowing of the resurrection of the dead, in the life to come. Jesus is life. Jesus is the resurrection, both now and in the coming kingdom.

Barrett seems uninterested in debating the historicity of the event. Here are his words: “What is the historical value of the story? This question depends mainly on the view taken of the sources and purpose of the gospel. It is of course possible to take an a priori view of miracle which rules out the possibility of such an event as this. If such an a priori view is taken there is clearly no further room for argument, and it is not within the province of this commentary to discuss the philosophical aspects of miracle.”

Back to the story. Jesus loves Lazarus and his sister Mary (one of the seven Marys mentioned in the gospels) and his sister Martha. They live in Bethany, a suburb of Jerusalem. Some have suggested that Lazarus (not John) was the disciple whom Jesus loved, because of this passage. The story of Mary (sitting the feet of Jesus) and Martha (working) is Luke, not John. But the personalities of the characters in the these stories seem consistent in both gospels: Martha, taking center stage, wracked with grief complains that if Jesus had been on time, none of this would have happened in the first place. The voice of grief.

This is the only place in which this story is recounted. Jesus pushes Martha. “I am the resurrection and the life.” This passage is read at most funerals. “Do you believe this?” Martha’s confessional response should be right up there with Peter’s: “Yes Lord, I believe that you are the Messiah, the Son of God, the one coming into the world.” This is every bit as striking as Peter’s confession.

Lazarus’ resurrection was penultimate. It is not the final word. In fact, all healing of any kind is penultimate. Here’s what I mean. Lazarus may have been raised from the dead, but then he died again, right? I mean, unless he’s still roaming around somewhere, he had to die again. I’m not sure I relish the idea of dying twice. Lazarus’ story is a prefiguring of the resurrection of the dead to eternal life. A final resurrection. This is what we celebrate.

Since we have spoken as the Gospels as art, I would like to consider art as gospel. Let us allow the world’s great artists to tell this story, a story that has been captured in art more than most gospel stories.

Nearly 160 years later, Nicolas Fromen (1425-1486) did this piece, below, on wood. It’s part of a triptych. Bodone painted this to keep his father (who had committed usury) out of purgatory.

Eerie how the artist stares out at us through the portals of time. Lazarus is up in this picture, but he’s not looking so good. Perhaps like the guy in The Mummy. He’s been dead several days. I don’t look so good after a night’s sleep.

Mary and Martha are in the lower left, weeping. People to the outside of the crowd are probably Froment’s contemporaries. One (upper right?) may be his patron.

Note the disciple to Jesus’ left is reading a book. This work is 1461. The printing press was invented in 1450. Interesting that Froment paints people in contemporary outfits, using the new technology of the day. It would be like painting a Raising of Lazarus today and having someone reading from an iPhone, in blue jeans.

I love how the Renaissance artists painted the Bible stories into their day and age: scenery, architecture, clothing. I wish artists did more of this today. Our desire to portray things as closely as possible in their original context is good, but we’ve also lost something: imagining these things in our day and age.

Here’s one by Dutch artist Geertgen tot Sint Jans. It’s a Northern Renaissance classic. He painted this when he was 20 years old, around 1480. It’s been in the Louvre for over 100 years. Note Mary and Martha to the lower right, and the Pharisees at the upper left.

Looking at this close up reveals quite a few peculiarities. What’s that above Mary’s head? You might not be able to make it out here. You can find it online and view as closely as you wish, all of these pieces of art simply by typing the artist’s name. It is fun to show them on a large screen in powerpoint at an adult ed forum. Here’s Geerten up close. It’s public domain: http://www.backtoclassics.com/gallery/geertgentotsintjans/theraisingoflazarus/

This next one is by Benozzo Gozzoli, ca. 1497. (I love his name.) Luther was 14 when this was painted. Gozzoli died shortly after painting it. He also painted himself into one of of his works, but not this one (see Procession of the Magi). Besides having a totally cool name, Gozzoli painted a LOT of Bible passages. Look at the little people in the lower left. This is a curiosity of Renaissance art I’ve never fully understood. Mary and Martha are on the lower left. The disciples have halos.

I have to admit, one of the things that bothers me most is the fact that Jesus in these depictions seems so emotionless. It strikes me that one of the important parts of this passage is the fact that Jesus wept. A very divine Jesus in John’s high christology still weeps at the death of Lazarus. Our hope of the resurrection does not exempt us from deep feelings of grief.

This next is a Michelangelo Merisi da Caravaggio from 1609. His use of light is incredible. The light emerges from somewhere behind Jesus. The new Baroque (1600-1750) realism.

Note that the light picks up the detail of Jesus’ hand, which looks conspicuously like Michelangelo’s hand of God, for obvious reasons.

Or is he trying to make it look Adam’s hand? Probably not. God’s right hand. Adam’s left. In either case, it appears Lazarus is not so sure about wanting to return to this earthly life, as his hand seems to be up in protest. 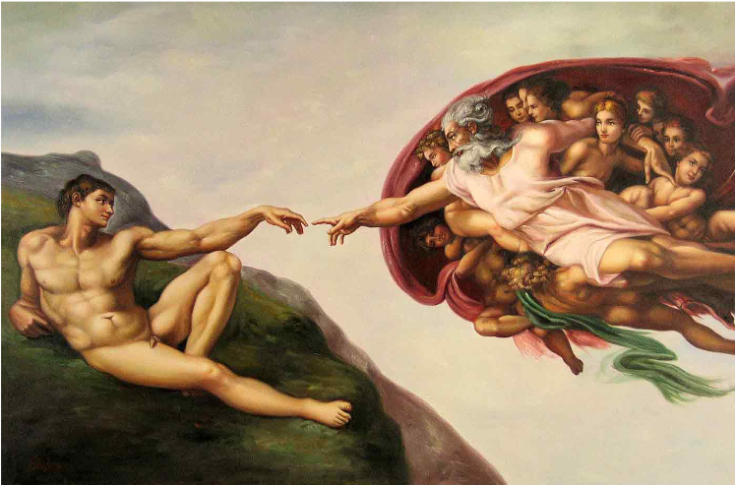 This Rembrandt is from 1630. Finally, a little emotion on Jesus’ face.

Jean-Baptiste Jouvenet’s Raising of Lazarus (1706) is rather busy. Everyone seems to be shocked, even Jesus.

The Lazarus Raising by Gustav Dore (1865) is part of a long series of Dore’s work on John’s gospel: http://catholic-resources.org/Art/Dore-John.htm. It’s black and white, and for the life of me, I can’t figure out where the light is coming from. 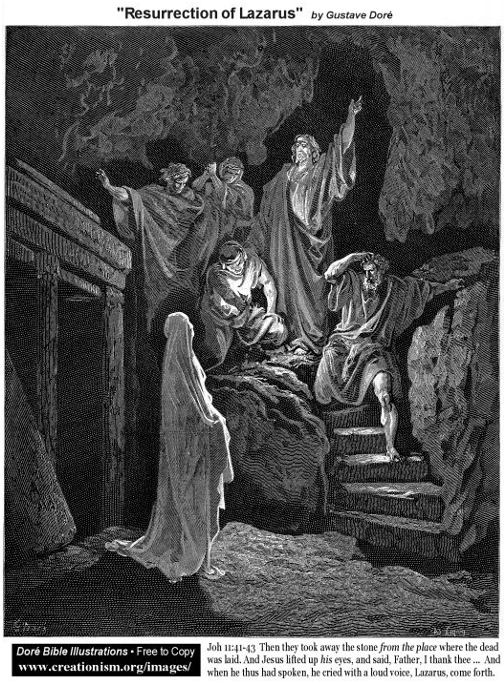 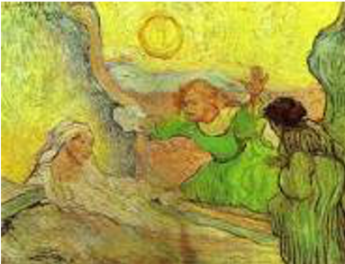 But nothing beats the 20th century for abstract. This piece by William Congdon was produced in 1961:

So which of these is historically accurate? Which of them are true? None of them. All of them.

This story is clearly a foreshadowing of the resurrection. It is a message of hope, and a message about who this Jesus is, and what his ministry means. There is more to life than meets the eye. God is working life in the midst of death. This Jesus is the resurrection and the life.