On this day in 1974, Martin Luther King’s mother was assasinated

Many people are aware of Martin Luther King’s assassination, but did you know they also killed his mother?

Alberta Christine Williams King (September 13, 1904 – June 30, 1974) was shot and killed as she sat at the organ at Ebenezer Baptist Church, by Marcus Wayne Chenault, a 23-year-old Black Hebrew Israelite, six years after the assassination of Martin Luther King, Jr. She was 69 years old. 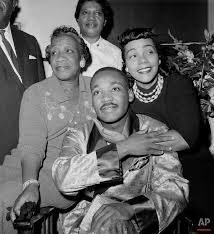