Splashed with Love and Promise for Ministry 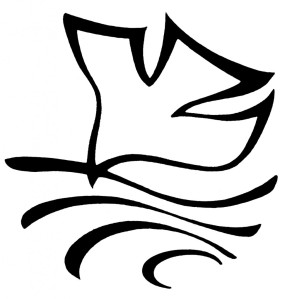 Listen to the podcast by Bishop Michael Rinehart

Genesis 1:1-5 – In the beginning God created, by the Word and the Spirit hovered…

Psalm 29 – Ascribe to the Lord O heavenly beings… glory and strength. The voice of the Lord is over the waters.

Acts 19:1-7 – Paul encounters disciples in Ephesus who were baptized with John’s baptism. They are baptized again in the name of Jesus. Paul lays hands on them, and they receive the Holy Spirit.

Mark 1:4-11 – John appears in the wilderness, proclaiming a baptism of repentance, and pointing to Jesus. Jesus is baptized, and a voice comes from heaven: “You are my Son, the Beloved; with you I am well pleased.”

The Baptism of Jesus

The Gospel reading for the Baptism of our Lord is from Mark 1. After all the Luke stories of Jesus’ birth, and the Magi from Matthew, we now hear Mark’s version of the story. Mark’s origin story is quite different than Luke’s and Matthew’s stories.

The earliest canonical gospel, the Gospel of Mark, has no birth story of Jesus. If you look at the first chapter of the Gospel of Mark, you will notice that his gospel begins with Jesus, fully grown, and John the Baptist at the Jordan River. In other words, the first Gospel has no Christmas.

Likewise, the apostle Paul, in his letters, has no mention of an extraordinary birth of Jesus. This is to say the earliest writings we have of the apostles never mention anything about Jesus’ birth, much less anything unusual about Jesus’ birth. Paul writes his letters in a period 10-30 years after the crucifixion. In his letters, Paul never uses the word “Bethlehem.” There is no star, no inn/no guest room, no manger, no shepherds, no Magi and no virgin birth. Either Paul and Mark know nothing about the events in Bethlehem, or they simply aren’t central to their faith and theology.

Paul was able to construct a perfectly good practical theology without Jesus’ birth stories. Mark constructed a perfectly good gospel (the first one, many believe) without an infancy narrative. The Christmas story is not necessary for his proclamation of the good news. The fact of the matter is the birth of Jesus simply wasn’t that important to the early church. Christmas did not become a major celebration until the fourth century.

For the first 300 years of Christianity, the birth of Jesus appears to not have had much significance. In fact, birthdays were less important than death days. The early church ascribed much more importance to Jesus’ baptism.

The birthday of the emperor, the Son of God, was celebrated throughout the empire. In time, the birthday of Jesus, however it came to be set (see my notes from last week), would gain importance. The earliest mention of a Christmas celebration occurs towards the beginning of the fourth century. There is a brief mention of a group of people who have fixed a date for Jesus’ birth in Clement of Alexandria, but that date is May 20, and there is no mention of a celebration.

The beginning of the good news of Jesus Christ, the Son of God. As it is written in the prophet Isaiah, “See, I am sending my messenger ahead of you, who will prepare your way; the voice of one crying out in the wilderness:
‘Prepare the way of the Lord,
make his paths straight,’”

4John the baptizer appeared in the wilderness, proclaiming a baptism of repentance for the forgiveness of sins. 5And people from the whole Judean countryside and all the people of Jerusalem were going out to him, and were baptized by him in the river Jordan, confessing their sins. 6Now John was clothed with camel’s hair, with a leather belt around his waist, and he ate locusts and wild honey. 7He proclaimed, “The one who is more powerful than I is coming after me; I am not worthy to stoop down and untie the thong of his sandals. 8I have baptized you with water; but he will baptize you with the Holy Spirit.”

9In those days Jesus came from Nazareth of Galilee and was baptized by John in the Jordan. 10And just as he was coming up out of the water, he saw the heavens torn apart and the Spirit descending like a dove on him. 11And a voice came from heaven, “You are my Son, the Beloved; with you I am well pleased.”

The last three verses are the baptism of Jesus. By verse 12 Jesus has moved into the wilderness, that liminal space between his baptism and the beginning of his public ministry. Amy-Jill Levine, in The Jewish Annotated New Testament points out the royal significance of the voice from heaven at Jesus’ baptism:

The rabbis referred to words from heaven as “bat qol,” “the daughter of the voice”; here they combine Ps 2.7 and Isa 42.1–2. The former is a psalm of royal adoption; when anointed, the Davidic king becomes a son of God.[i]

In this pronouncement Jesus is referred to as the Son of God for a second time. The first was in the inscription in verse 1. The disciples never realize that Jesus is the Son of God, but the reader/listener knows from verse 1. It isn’t until the end that the centurion at the foot of the cross realizes, “Truly, this man was the Son of God.” Even the voice from heaven appears to be a private message to Jesus. Again, Amy-Jill Levine:

Jesus is never called “Son of God” by the disciples, but he is by God, by unclean spirits (5.7), by Jewish authorities (14.61, in a question) and by a Roman soldier (15.39). In some Christian circles Son of God was elevated to include preexistence (as in the prologue to John’s Gospel, 1.1–14) and equality with God (Jn 5.18), but this only became a general view in Christian doctrine later. In Mark, Son of God was more likely understood as the raising of a human being to a special status with God, influenced both by the model of the Davidic king and the Roman emperor (Livy 1.16). This view of Jesus’ status, had it been adopted by the community as a whole, would have been that God “adopted” Jesus as God’s son, as the king was adopted by God at the ceremony of installation (as in 2.7 cited above).[ii]

Interestingly, Christian and non-Christian scholars alike believe the baptism and crucifixion of Jesus to be the most certain historical events in the life of Jesus of Nazareth. Historical studies of Jesus begin with these two events. Jesus’ baptism is described in the first three Gospels. The Gospel of John does not directly mention Jesus’ baptism.

Admittedly, it seems odd, John baptizing Jesus. In Matthew’s version, even John balks at the idea: John tried to prevent Jesus from being baptized, saying, “Wait. Haven’t we gotten this backwards? Shouldn’t you be baptizing me?” (Matthew 3:14-15, paraphrase) Jesus responds, “Allow it for now, for thus it is fitting for us to fulfill all righteousness.” So, one reason for Jesus being baptized by John may be simply be Jesus’ desire of submit to God’s plan. (Just as Mary did in our Advent 4 reading?) “Fulfilling all righteousness” may be a first reason for Jesus to be baptized.

Jesus came to John, whom he considered to be one of the greatest people ever born (Luke 7:28, Matthew 11:11). Jesus’ baptism is an alignment with John’s vision and mission. This may be a second reason for Jesus to be baptized. Some have suggested that Jesus was a disciple of John. Others have suggested that they had parallel ministries, and that Jesus’ ministry took off with the arrest and death of John the Baptist.

A third possible reason: the purpose of baptism is not just repentance. In Acts 2:38, Peter tells people to be baptized for forgiveness and to receive the Holy Spirit. The Holy Spirit descends upon Jesus in the Markan narrative.

A fourth possible reason: the baptism is the launching of Jesus’ mission and ministry. The affirmation of Jesus’ call from God is made clear in Mark, “You are my Son…” not “This is my Son…” as in Matthew and Luke. This is a private communication between God and Jesus, because in Mark, Jesus’ identity is not known to the other characters in the story, yet. It unfolds. Also, we have a reflection of Psalm 2, the David king as God’s son:

These words of affirmation will be repeated on the last Sunday of Epiphany, Transfiguration Sunday, only this time for everyone, “This is my beloved Son…”

A fifth reason may be repentance itself. The doctrine of the sinless nature of Jesus may seem to conflict with Jesus’ repentance, but only if we think individually. If we think of repentance corporately, communally, Jesus is participating in the repentance of the nation of Israel. Repentance in this understanding, is a national turning away from with ways of hatred and violence. Jesus could sign onto this kind of communal repentance.

Most importantly, Jesus’ baptism anticipates his own death and resurrection. Baptism represents death, and coming out of the waters, resurrection. Romans 6:3-4 says the familiar words:

Do you not know that all of us who have been baptized into Christ Jesus were baptized into his death? Therefore we have been buried with him by baptism into death, so that, just as Christ was raised from the dead by the glory of the Father, so we too might walk in newness of life.

The central event of Jesus’ ministry is his death on the cross and subsequent resurrection. This Sunday may give the preacher an opportunity to talk about baptism as an inauguration of our own ministry, as well as our call to “be buried with Christ” so that we might rise with him and walk in newness of life. Into what ministry have you been baptized?

This Sunday might be a great time to celebrate Affirmation of Baptism (ELW p. 234), complete with sprinkling. Not sure how you do that online in the age of pandemic. Invite people to sprinkle their families? Themselves? Maybe mark the sign of the cross on their foreheads with water? This may be a good Sunday for a sermon inviting people to consider what ministry God has called them to in their baptism.

When all fine things melt away,
platinum and books and Chagall oils and jazz
and even memory becomes
another drop in the liquid cosmos
there will be, as in the beginning,
light, an emanating presence permeating darkness,
absorbing all disparate thoughts and persons
into one, and this one you may call Christ,
the story of all that lives, dies, and is renewed.
And when you are one with flowing truth
and love has enveloped you and accepted
you into its infinite pool
where will your beliefs be then?
What utterances of your small mind
and self-satisfied tongue will survive?
What contrivances of the god you
once held firmly in your breast pocket
next to your fountain pen
will you cling to then?
For which inflated mylar balloon of yourself
will you still hold the string?
None!  You will gladly, freely,
lovingly let each one flow like water
through your fingers and you will be satisfied
to be a part of what you once
wished to have mere distant, controlling knowledge.
So why, if this same fluid universe
has baptized you already into your belovedness
and puddled you up with everything and everyone
have you not yet let go and melted
you fine thing.
Pastor Michael Coffey, First English, Austin, Texas[iii]